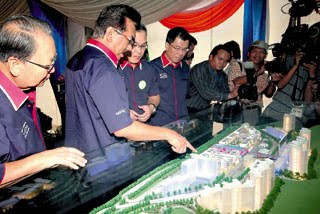 A RM3 BILLION mixed commercial development that will see the Tanjung Aru Railway Station getting a major facelift has begun with the launch of the Aeropod by internationally-renowned Malaysian developer, SP Setia Berhad, Saturday.

The ambitious project would be done in five phases and includes retail offices, three hotels (including a 5-star hotel). They are expected to be completed between eight and 10 years from now.

Preparation of the infrastructures as well as construction of the State Railway Department headquarters at the present station would be done under Phase One.

Costing more than RM200 million, the first phase is expected to be completed in three years.

The launching ceremony was a culmination of more than three years of studies conducted by SP Setia to know Sabah and bring their worldwide knowledge in terms of property development into the State.

Officiating at the event, Chief Minister Datuk Seri Musa Aman said the State Government welcomed such initiative as Sabah aimed to continue positioning itself as a main gateway for investments from within the region, including through the region of Brunei Darussalam, Indonesia, Malaysia, Philippines-East Asean Growth Area (BIMP-EAGA).

He said in tandem with the aim, the real estate market has also become stronger in recent years with increased investor interest and overall confidence in Sabah's economic growth.

"We are seeing an upward trend in real estate value not only in Kota Kinabalu, but also in other major towns like Sandakan, Tawau and Lahad Datu," he said.

Musa who is also State Finance Minister said the redevelopment and modernisation of the railway station, which is situated within SP Setia's Aeropod, is especially important as the State enters the second phase of the Sabah Development Corridor (SDC).

He said the Aeropod's proximity to the Kota Kinabalu International Airport and integration with the Tanjung Aru railway station will allow it to benefit from the projected growth in tourist arrivals to Sabah.

"The development of tourism calls for a number of initiatives, including improvement of our transport systems, such as the redevelopment and modernisation of the Tanjung Aru Railway Station.

"This is one of a number of efforts that will provide an impetus to Sabah to attract a greater number of visitors, helping the SDC achieve part of its goals.

"The second phase will run until 2015 and will see the SDC pursuing an ambitious list of development projects to generate employment and income for Malaysians in Sabah, and to help jump-start sustainable economic growth," he added.

Musa said that the cumulative planned investment that has reached RM63 billion, almost four times the target value set in 2010 now that the SDC is entering its second phase of growth.

He also said that the railway line from Tanjung Aru to Tenom has been around since the early 1900s and is steeped in history as a transportation link built by the British to transport produce from the inland to the coast for export.

On another note, he said developers need to keep a pulse on the needs of potential homeowners who are looking for affordable properties with lifestyle concepts.

"I urge developers to continue pursuing innovation and creativity, incorporating designs and proposing material as well as structures that will require less use of energy.

"There is enough knowledge and technology for developers to tap from in offering greener buildings and with that reducing negative impacts on the environment and natural resources.

"Sabah is known as a biodiversity hub, and efforts to integrate environmental consciousness in our buildings will go a long way in protecting our natural resources," he said.

The railway workers' quarters at the 60-acre project site would be relocated to Kinarut to pave the way for the project, he said when met after the launching ceremony.

Liew said the first phase involving 20 acres would see infrastructure development as well as the construction of the Railway Department headquarters.

There would also be a Galleria, a museum on the North Borneo Train service, an aquarium at the drop-off point, which is set to be the centre of Aeropod.

In the later stages of the project, about 5,000 units of apartment have also been planned, he said. Liew said the Group took about three years to study and understand what they can do in Sabah.

"There are a lot of good developers in Kota Kinabalu so when we come here we need to make sure that we do something different," he said, adding that it was easy to put everything of the project into a conceptual 3D video format but to turn it into reality is another thing.

According to him, SP Setia is the only Malaysian property developer that won three awards from the International Real Estate Federation (FIABCI) and had projects in other countries such as Vietnam, Singapore, Australia and perhaps United Kingdom,

"You tell people this and they say so what? We must show it to them.

Seeing is believing," he said, adding that about 120 staff from its various overseas offices were specially flown in for the ceremony in order to give them first hand information and hopefully "sell Sabah" once they returned.

For Liew, Aeropod would give SP Setia the opportunity to showcase what it had learned from all over the world.

Aeropod is modelled after SP Setia's successful SetiaWalk development in Puchong and conceptualised along the Group's development philosophy of 'Live Learn Work Play'.