CYBER CRIMES ON THE UPSURGE 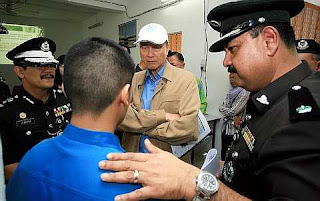 THE Vice-Chairman of Malaysia Crime Prevention Foundation (MCPF), Tan Sri Lee Lam Thye said the country has seen a staggering upsurge in the number of cyber crimes last year with over 15,000 reports lodged.

And according to Minister of Science, Technology and Innovation, Datuk Seri Dr Maximus Ongkili, a total of 15,218 incidents of cyber crimes were reported via the Cyber 999 Help Centre, which is equivalent to an increase of 88 per cent from 8,095 crimes reported in 2010.

Most of the cases reported were connected to character assassination and cheating.

The Cyber 999 Help Centre received numerous reports from people duped by ‘get rich’ scams, pornography etc on the internet, with several cheating cases involving victims who lost all their hard-earned savings.

Lee said the cyber criminals take advantage of human weakness and have chosen to strike mercilessly, adding that Interpol had estimated that losses resulting from cyber crimes were larger than the global black market for marijuana, cocaine and heroin combined.

“Clearly the increasing spate of cyber crimes not only in Malaysia but worldwide, calls for more effective law enforcement, harnessing modern and latest technology to combat them.

“The Internet and computers are the most common tools we use in our daily life. The use of computers and the Internet has expanded over the years.

“When the computer was invented, no one thought it will become a source of committing crime. Day by day, cyber criminals get smarter and search for new ways to commit crimes and escape without getting caught,” Lee said.

Currently, cyber crime is the latest and most complicated problem. The illegal activities make use of the Internet, a public or private network, or an in-house computer system.

“Though cyber crime involves a computer or network, the computers may or may not play an instrumental part in the commission of the crime. Some common forms of cyber crimes are identity theft, cyberstalking, phishing, child pornography, spam and cyberterrorism. It can also involve illegal access to company information.

The computer is targeted for unlawful acts such as unauthorised access to computer system or computer networks, e-mail bombing, theft of information contained in the electronic form, internet time thefts and Trojan attacks.

“Though it is nearly impossible to eliminate cyber crimes from cyberspace, it is possible to keep them under check.

“In order to prevent and overcome computer crimes, one should be very careful while using the computer, especially the Internet.

“Cybercrime is a global phenomenon that affects all net citizens, corporations and governments which can cripple the social well-being and economic development of our country,” Lee commented.

In realising the danger cyber crimes posed to the country, Malaysia introduced the National Cyber Security Policy which was implemented in 2006.

Lee said the policy needed to be reviewed and updated to effectively deal with cybercrimes that comes along with the Internet.

The MCPF also calls for greater effort to strengthen the moral fibre and reinforce the resilience of the young generation so in this ICT age they will not be involved in cyber crime and become computer criminals.

“It is all the more essential to protect our young generation from the negative influences information technology has brought,” Lee stressed. (theborneopost)