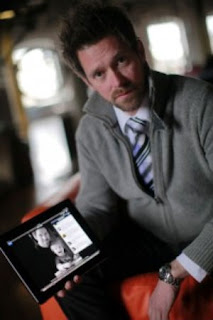 PHOTO....Mark Byron holding up his iPad with a photo of himself and his son.

A MAN in Cincinnati, Ohio, in the US who was threatened with jail time for posting comments about his estranged wife on his personal Facebook page unless he posted daily apologies for a month, says the court ruling violates his freedom of speech.

Mark Byron, who is making the apology to avoid 60 days in jail, said Friday night that he believes it's too late for him to appeal the domestic relations court ruling as planned.

But Byron and free speech and media experts say it should concern other users of the social networking site.

With hundreds of millions of people using Facebook for communication, Byron said that "if they can do this to me, they can do it to others."

The idea "that anybody could tell you what to say to your friends on Facebook should be scary to people," said Cincinnati attorney Jill Meyer, who specializes in free speech and media issues.

The ruling is highly unusual and "troubling because it's a court telling someone to say something to - in some regards - his chosen group of friends," said Meyer.

She noted that the comments were not directed to Byron's wife, Elizabeth Byron, who was blocked from accessing the page. 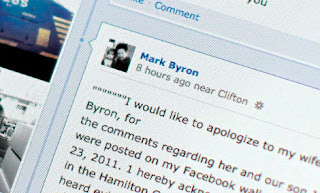 CHOICE....Byron was given a choice of going to jail or apologising to his estranged wife on Facebook.

According to the ruling, Byron posted comments on his page in November, saying in part, "If you are an evil, vindictive woman who wants to ruin your husband's life and take your son's father away from him completely - all you need to do is say you're scared of your husband or domestic partner and they'll take him away."

The Byrons are involved in ongoing divorce and child custody proceedings.

Byron has said his wife and the court have prevented him from seeing his 17-month-old son many times. The court maintains he is allowed to see him on a twice-weekly basis.

Domestic Relations Magistrate Paul Meyers last month found Byron in contempt of a protective order because of his Facebook comments.

Meyers said that Byron could avoid a 60-day jail sentence and a US$500 (RM1,506) fine by posting the apology - written by Meyers - to his wife and all of his Facebook friends and paying her attorney fees. The same apology must be posted every day no later than 9 am.

The June court order prohibited Byron from causing his wife physical or mental abuse, harassment or annoyance. She asked in December that he be found in contempt after learning of the Facebook comments.

Byron's comments expressed frustration, but they were not threats and he didn't make them to his wife, said Cincinnati attorney Jack Greiner, who also specialises in free speech and media issues.

Greiner said he doesn't think the First Amendment "allows a court to find that someone has harassed or caused a person to suffer mental abuse merely by expressing one's opinion about a court proceeding in a non-threatening way."

Greiner said that a court compelling speech through a court-written apology raises as many free speech concerns as actions prohibiting free speech.

The statement that Byron says he has been posting since Feb 13 has him apologizing to his wife for "casting her in an unfavourable light" and to his Facebook friends for "attempting to mislead them.

Byron said the apology forces him to make false statements.

The ruling says several of Mark Byron's comments were "clearly intended to be mentally abusive, harassing and annoying" to his wife and "generate a negative and venomous response toward her from his Facebook friends."

Responses by Facebook friends to his posting caused Elizabeth Byron to be "afraid and concerned," according to court documents.

Byron and his attorney, Becky Ford, say he made his comments out of frustration and never expected his wife to see them since she couldn't access his account.

"Once he made the comments, some of his Facebook friends started making inflammatory comments which he had no control over," Ford said.

His comments were "nothing other than free speech communication where he was venting truthful information," Ford said.

Bryon must appear in court March 19 and show proof that he posted the apology or face jail. (AP)