DONT' USE FAMILY AS AN EXCUSE! 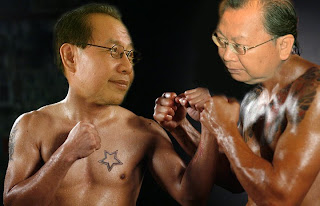 I CALLED this Press Conference in response to what my brother, Tan Sri Pairin, was quoted as having said in Keningau yesterday and which appeared in the front page of the Daily Express today.

Firstly, I need to categorically state that what was said by my brother are all lies and half-truths. Secondly, when he refer to 'them' he shows his desperation to cling to power and his fear of losing power.

Thirdly, I have said it before and I say it again that this elections has nothing to do with family matters.

He is my elder brother and I have nothing against him and I love him as any brother would do but I love the people and this country more.

I would like to advise my brother not to use family relationship as an excuse for political expediency to avoid a contest.

The people are suffering and the State has lost its integrity and independence and they want change but things will not change under the present UMNO/BN government.

Regrettably, my brother has become a traitor to the State and the people’s interests preferring instead to work and support UMNO, the colonizers, whom he knows very well as the party which had grabbed powers from previous governments undemocratically, promoted population manipulation via dubious MyKads given through the back-door to illegal immigrants and treated Sabah unfairly like a neo-colony of Malaya.

Let me tell you what really happened in 1994 when PBS won the elections by a razor-thin majority of 25 to 23.

At that time, the PBS elected representatives were gathered at Pairin’s official residence and Pairin was denied access to the Istana to be sworn in as the Chief Minister. I was offered to be sworn in as CM by the then Prime Minister Mahathir Mohamed but I refused and I urged Pairin to go and see the PM to negotiate a solution but he did not listen.

I was then contacted by Kuala Lumpur to receive a call from the PM and I brought a lawyer, Yunuf Maringking, to be a witness after obtaining permission to do so from Pairin. Yunuf Maringking is still alive today to vouch for what happened.

Mahathir called and said “I am going to make an announcement on TV very soon but I need your answer to my offer to be sworn in as CM” to which I replied “Sorry, I cannot accept because I am not the leader of the party. I do not want to become CM in this way. As my brother has won the elections fairly, let him be sworn in and accept him as the CM. Please open the gate for him to go in the Istana.”

To which Mahathir replied, “OK, I understand but tell your brother to leave 1 or 2 Cabinet posts open to accommodate a solution.”

Unfortunately, when my brother, Pairin, was sworn in, he ignored this request and filled up all the Cabinet posts leading to the crisis of 1994.

Despite having been sworn in as CM with his Cabinet, the PBS government could not function and they remained as 'locked in the official residence' for fear that some of their Assemblymen might cross-over.

Rather than sitting doing nothing, I again advised my brother to go the Kuala Lumpur and meet the PM and negotiate for a solution but he ignored my advice until the situation had become critical and untenable.

My brother finally agreed to send me and Bernard Dompok to meet the PM instead and to convey a list of his conditions. When I presented this to Mahathir, the PM said “Its too late. You can no longer put up any conditions to negotiate as 2 or 3 Assemblymen has already jumped.”

So Mahathir advised Pairin to resign as CM or be removed by a no-confidence motion in the State Assembly.

I then called Pairin to convey this advice to which Pairin responded “I am prepared to resign, if this will help resolve the situation”.

So when the press and media asked me at the said Hari Raya function, which my brother referred to in the press report, I simply repeated what Pairin had said.

Unfortunately, as you know the BN media and press loved to manipulate and sensationalize and broadcasted only a portion of the sentence which sounded more like an announcement that Pairin had resigned.

That is what happened in1994. That is the truth. The people must be told and know the truth, the whole truth and nothing but the truth. It is unfair for people to accuse me of something which I did not do.

Who is actually lying?

Regarding his alleged leave, I have nothing to do with his leave and I know nothing of it and I have said nothing in my speeches to any person or to the press or media. How can I say something which I am unaware of?

The truth is Pairin wants to re-contest and hold on to his Parliamentary seat and fear having to face his brother in the coming general elections.

Let the people be the judge whether they want Pairin to remain as MP, whether he has carried out his duties and work effectively and satisfactorily for the past few years.

He does not know where I am contesting but he assumes I will be contesting there against him. He is also assuming that he will be re-contesting in Keningau and that he is a 'winnable candidate' as propounded by the current PM.

If you have carried out your duties and done your work effectively and championed the cause of Sabah and its people, you should be confident of being re-elected by the people.

There is no need to find excuses and promote lies to the people to discredit me, just to defend his position, unless he has failed his people and is not confident of being re-elected by his own people.