'NEW CITIZENS' A TREASON FOR SABAHANS 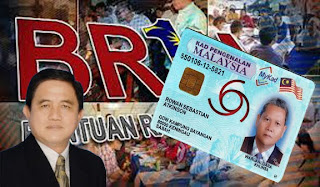 SABAH Progressive Party (SAPP) has cried foul that the BR1M scheme seemed to have benefited those who are not qualified, including the 'New Citizens' who are originally foreign nationals.

"I believe this could be just the tip of the iceberg; there could be many more such cases which we do not know. This is a gross waste of the taxpayers' money, which is supposed to benefit the bona fide Malaysian citizens," he said.

He however said there was no point lodging a police report over the matter, citing his previous personal experience involving the theft of his identity by an illegal immigrant, in 2008, where till today nothing has come out of it despite lodging of police report, and raising it during the BN meeting.

Majimbun who is also the MP for Sepanggar further claimed that in his constituency alone, more than 3,000 eligible applicants for the BR1M had been rejected.

"The relevant authorities have put the blame squarely on the Inland Revenue Board (IRB)," he said.

He also shared his concern over the presence of large number of 'dubious citizens' in the state who obtained their citizenship through dubious means like the infamous 'Project IC' scheme.

He stressed that such a concern is legitimate citing the extraordinary increase of the Sabah population in the last three decades since 1970, by 390%, as compared to Sarawak's 148% for the same period.

He nonetheless was confident that the perennial issue of illegal immigrants and dubious citizens can be effectively resolved with SAPP's proposed plan to issue Sabah's own identity cards, if it gets to form the next State government.

"But in order to achieve this, we, the people of Sabah must all unite as one united force to vote the BN out in this coming General Election. We must succeed this time, otherwise we will be damned forever. Always remember that a vote for BN is a vote for UMNO," he said.