PAKATAN TO WRAP UP SEAT NEXT MONTH 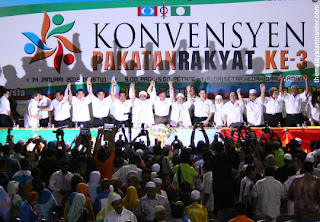 CONVENTION....File photo of PR leaders at their convention last month. Talks are still going on to settle seat allocation among the three parties in the pact.

PAKATAN Rakyat (PR) is expected to finally wrap up seat negotiations between its three component parties by the end of March, after months of delays and reports of squabbling between party leaders over seat allocations.

The Malaysian Insider understands PR leaders had agreed to a “general” deadline during a recent leadership council meeting, having taken into consideration elections will not be called anytime soon.

“Generally, we want to wrap it up by end of March. DAP proposed it (during the meeting). We want to settle this as soon as possible.

“It would be good to wrap it up as elections might take place after the next Parliament sitting,” DAP national socialist youth (Dapsy) Chief Anthony Loke told The Malaysian Insider.

Loke stressed that discussions on parliamentary and state seat allocations were coming along smoothly, and that negotiations were about “80 per cent” complete.

“Majority of the seats are settled,” the DAP leader said with the exception of four states Sabah, Sarawak, Pahang and Johor.

“For these states, more talks are needed because there are overlapping of (demand) for seats... parties want to contest more seats,” he added.

According to the Rasah MP, most of the overlapping seats were either between PKR and the DAP, or PKR and PAS.

“PKR wants to contest mixed constituencies, they also want to contest Malay areas, so naturally there is overlapping on either DAP or PAS,” he added.

PR leaders previously said seat talks would be concluded by the end of September last year, amid talk of squabbling among its state leaders.

PKR has also said it will contest more federal seats in the next general election despite already taking the lion’s share of seats and suffering the most number of party defections since 2008.

PKR Secretary-General Saifuddin Nasution told The Malaysian Insider in December although seat negotiations for some states have yet to be finalised, PKR will most likely have “slightly” more candidates running in parliamentary seats than in 2008.

This was after vice-president Salahuddin Ayub said in July the party wanted to contest 80 federal seats.

Umno has declared it can win back PKR-held seats as the PR linchpin is seen as the weakest link in the opposition pact.

Election 2008 saw PKR become the largest opposition party in Parliament with a total of 31 MPs as BN suffered its worst performance at the polls ever, ceding five state governments and 82 parliamentary seats.

But it failed to defend Hulu Selangor in a by-election and lost a further six MPs who decided to become independent, allowing the DAP to become the biggest opposition party in Parliament with 28 MPs.

PAS, despite being the largest PR party in terms of membership, had the smallest representation in Parliament with only 23 MPs after the polls.