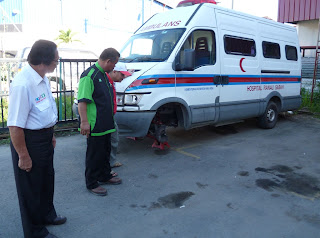 BROKEN.....Aminuddin and Edward Ewol Mujie inspecting the broken ambulances in the workshop.

The Sabah PAS State Commissioner Hj Mohd Aminuddin Aling was informed by many people in the various parts of Sabah saying that there are shortages of ambulances in the various hospitals stretching from Kudat. Kota Marudu, Sipitang, Beaufort, Kuala Penyu, Kota Kinabalu, Ranau, Tenom, FT Labuan and in the East Coast of Sabah. These hospitals having problems with ambulances covered almost every where in Sabah.

PAS Chief said he would like to have some explanation from the Director of Health on this situation and on the reason why there is such a shortage of ambulances to serve the patients.

He said from a short visit conducted yesterday with Sabah DAP State Vice Chairman Edward Ewol Mujie, he saw in three workshops in KK, there are already some 15 units of ambulances parked there for repair and pending for spare parts. These ambulances are Italian made 'IVECO', and their conditions are termed as 'Critically ILL', and some even classified as 'NO Cure'! 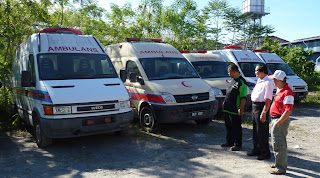 Aminuddin asked why these Italian made ambulances which are quite new and now mostly ended up in the workshop with engines jammed up, system failed and no spare-parts to put them back in running order.

The Ministry of Health could have bought the unsuitable type of ambulance to serve the Sabah hospitals. He would like the MOH to give an explanation as why so many ambulances broke down and parked in the repair workshops.

When is the MOH going to replace all these unserviceable ambulances? The ambulances can wait but the patients cannot wait. This is a clear indication that the hospitals have failed to guarantee an efficient live saving ambulance service. The other way of putting it is just like the ambulance broke the patient’s life also “broke down”!

Aminuddin urges the MOH to immediately to find ways to put right the situation on the serious lack of ambulances especially in the more remote districts.