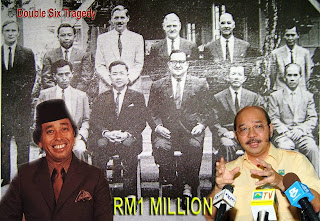 Justice Abdul Rahman Sebli found that Yong had 'crossed the line' when he insinuated that Harris had 'blood on his hand' though, he added, there was nothing wrong for Yong to call for a re-investigation of the air crash.

He also found that the use of the words 'crime' and 'assassination' by Yong were defamatory to Harris, and had provoked speculation that Harris knew in advance that something sinister was going to happen to the aircraft and that he had left Fuad to die so that he could take over as the Chief Minister of Sabah.

Harris had filed a RM50-million suit against Yong and the SAPP, whom he named as the first and second defendants, for allegedly insinuating that he (Harris) was involved in causing the plane crash.

Abdul Rahman said: “I consider a global sum of RM1 million to be fair and reasonable, having regard to all the circumstances of the case, including the conduct of the defendants at the trial and in their written submissions.

“In their written submissions, the defendants (Yong and SAPP) continued to attack the character and credibility of the plaintiff (Harris) as a witness and contended that the plaintiff, being a retired politician, is not even worth a penny. This is demeaning to the plaintiff,” he said in a courtroom packed with, mostly, SAPP supporters.

The court also set interest on the judgment sum at the rate of eight percent per annum from the date of publication of the insinuating statements made by Yong to the date of full payment.

Yong appeared calm and smiled when the judgment was delivered. Harris was not present in court.

Abdul Rahman said: “When he (Yong) insinuated that the plaintiff had blood on his hand and should be investigated for a possible criminal act, without making any attempt to verify the truth of the alleged new information revealed by (Gua Musang MP) Tengku Razaleigh Hamzah, the defendant had crossed the line separating fair comment and malice aforethought.”

On the first day of hearing on Nov 16 last year, Harris said Yong made an inaccurate statement, in fact an interpretation, when Yong asked for a re-investigation into the air crash to remove all doubts about the true cause following Tengku Razaleigh’s account of how he (Harris) left the ill-fated aircraft at the very last moment that saved his life.

The defendants were represented by counsel Simon Shim while Yunof Maringking represented Harris in the hearing that concluded on Dec 23 last year.