JAINAB TRYING TO HOODWINK THE RAKYAT 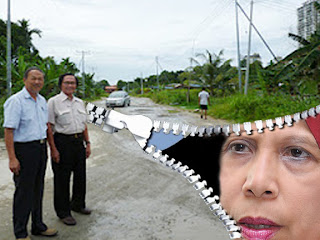 SABAH DAP State Vice Chairman, Edward Ewol Mujie said in his statement today that he is very perplexed regarding the various statements made by the Karambunai Assemblywomen Datuk Jainab Ahmand Ayid in respect of the sealing of the six kilometre of road from 1 Borneo complex to Kg. Kibagu behind the hypermall.

Edward said, the government will start work before the end of 2011 at a cost of RM20 million. She even said that the tender for the project has been called and that the deadline is on Monday, 14.11.2011.

She made such statement in respond to Edward Ewol Mujie’s statement highlighting the bad condition of the road leading from the hypermall to the remote seaside of Kg. Kibagu.

According to Edward if it is true that the tender for the project has closed 14.11.2011, he said by now it should have been decided on which contractor to do the said work. However, Edward said that on 20.02.2012 (Borneo Post) Jainab issued a statement that she can’t announce when the road upgrading work is going to start because every project will undergo a lot of process.

She assured that the project will start in 2012. Edward said her latest statement on this project is really confusing as she must remembered that in last November, she said that the said road will be sealed by the end of 2011. The upgrading of the road was informed by the Public Works Department Director Datuk John Anthony to her, that the tender will be closed on 14.11.2011.

Edward ask when the road upgrading work is going to start, can she assure that the project can start this year. Will it be before the 13th General Election or may be the BN Government is short of fund for this project?