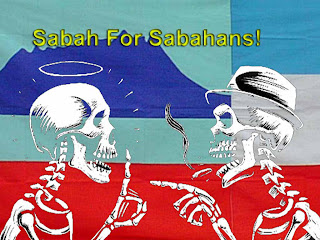 STAR Deputy Chairman, Daniel John Jambun, said here today that there is a fundamental difference between the PBS mentality and the vision of STAR. “PBS thinks of Sabah as one of the 13 states while STAR thinks of Sabah and Sarawak as the Borneo states under the Borneo Alliance pursuing the Borneo Agenda which is seeking rights and autonomy from the domination of Peninsular Malaysia,” he said.

“Maybe PBS has forgotten that Malaysia was formed as a four-nation Federation and not a combination of 14 unitary states.”

“As such, I can understand why Mositun simply can’t fathom the simplicity of implementing the 7-point Borneo Agenda,” he added. “PBS can only think in terms of living under the dominion of UMNO and not reforming Sabah to have more freedom to take care of its own development.”

Two days ago Mositun made an attack on Jeffrey accusing the later of “deliberately playing on the people’s sensitivities and parochial sentiments. He takes an issue and turns it into an academic exercise because he knows such things have public appeal, just to keep himself in the limelight.”

Jambun asked if it is more realistic for PBS leaders to continue in BN and be traitors to the people of Sabah by playing the role of stooges to UMNO. “Is that all PBS can think of for the people?” he demanded. “Isn’t the Borneo Agenda a much higher and long-term vision which can take Sabah to new heights?”

“Of course we are fishing for support, but we are doing that by offering a new and better alternative unlike PBS which has no other offer other than continuing with the same old system which is robbing the people of their rights and future,” Jambun said. “Is Mositun saying that the people don’t deserve anything better than the sorry situation they are now?”

He also asked if Mositun is proud of the statement by his party President, Tan Sri Joseph Pairin Kitingan that Sabah doesn’t need the opposition. “Is PBS now campaigning for a one-party system in Sabah like what they had in the communist countries?” he asked. “Has PBS lost its belief in the democratic system, or has Pairin simply gone senile?”

Jambun added that he can prove to Mositun that everything pledged in the 7-point Borneo Agenda is implementable and achievable when the Borneo Alliance takes over the state government.

“Since this is a matter of public interest and involves Sabah’s future, I hereby would like to challenge Mositun to an open public debate on the issue,” he said. “As he in the government I leave him to name the venue, date, and time for the debate. And if Mositun is not confident of debating in English, I am perfectly happy to do it with him in Bahasa Malaysia.”