'TOUCH POINT' OR TOUCH AND GO? 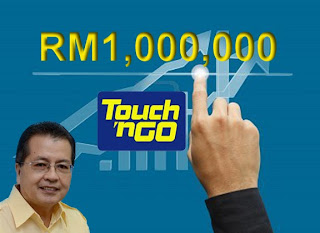 STARTING last year, the Federal Government allocated a special fund called 'touch point' or 'sentuhan kasih' of a slightly more than RM1 million for each of the Barisan Nasional MP, including those in Sabah.

This fund according the record went straight into the bank accounts of these MPs and it was entirely up to them to spend it as long as it is helping the people including in their emergency needs like during flooding or to help the poor replace the broken rooftop of their houses.

Now we would like to know how did the MPs spent this special fund last year? It must be transparent and every single sen should be accounted for as this involved public money, not private money of these MPs, even though it is bank-in straight to MP's own bank account, unlike other development funds.

"This 'touch point' fund was not even subjected to strict proposal through District Office. The MPs only need to report where they have spent the more than RM1 million.

"There had been talk that this fund could have been abused for some other more personal purpose and not all have gone to the deserving rakyat. The government under Musa Aman must explain how did they spend the fund," Marajin said soon after he delivered speech at SAPP ceramah in Kampung Kaung near here yesterday (Feb 26).

Marajin also queried that in Kota Belud, not many voters are aware of the 'touch points' as some quarters would rather 'conceal' it than expose the existence of such fund.

"This is denying the ignorant but in need of assistance. Could it be that only those close to MP concerned had the privilege to aces the fund last year? And what about this year? Nothing had ben heard about it in Kota Belud so far," he said adding that no one has heard how the MP divided this fund to the three constituencies under Kota Belud, namely Usukan, Tempasuk and Kadamaian.

"There is just no transparency and accountibility," he said.

Marajin also asked the government if it is true that the BN assemblymen continue to enjoy a 'sentuhan kasih' special fund of about RM500,000 each. This fund similar to the one received by MPs, differs only in quantum.

"How did the BN assemblymen spend his fund in their constituency. Some of these YBs always tell off constituents that there is no money even for very small community project. Where did all the fund go? Can some one tell us the public?" he said.