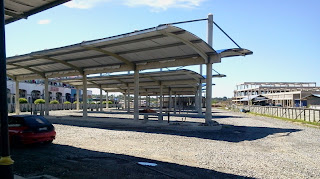 THE NEW Labuan bus terminal under construction has yet faced another stop work since the last time and the work site is at a total stand still for three months now. It is not sure when the work can be resumed.

The Labuan DAP Chief Lau Seng Kiat went to inspect the job site and found there are not work activities and some workers are sitting there playing with children. He asked what happened to the work and why the contractor is not finishing the work.

He was told that the workers are not being paid for three months now and they are not going to work without pay. The workers are given only some pocket money to buy food.

Judging on what we can be seen on site that the work progress there is already jammed and stuck. This is the second times that the construction of the bus terminal has stopped work, and it is obvious that there is something very wrong in this project.

Lau said that the completion of the new bus terminal is very important to solve the present bus parking problems and the traffic jam in the town centre. The new bus terminal also can effectively provide a more conducive condition for the commuters in Labuan town, especially when the new market is eventually completed next to it. This will be able to house all the buses on the island, and it is going to be big enough to cater for future increased number of buses.

The question is when can it be completed and it seems that there is going to be another long delay before it can be operational. What happen to the Ministry of Federal Territory, why are they not taking action on the contractor, or rather the government has no money to continue to pay the contractor?

No matter what it is, this has indicated that there is definitely something serious wrong with the execution of the contract. The government is to be blamed and held responsible for the foul arrangement and on the appointment of the contractor from last time till now.

The Sabah DAP KK Member of Parliament Hiew King Cheu shall raise the question on this issue in the coming sitting of the new Parliament session in March. Lau said this is a hot topic among the people in Labuan and the people here are beginning to wonder whether they will elect someone who can do the job properly or not. A simple job of building a bus shelter can stop work twice and that is unacceptable.