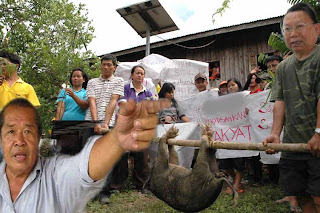 AS A VETERAN activist of Sabah issues, I would like to advise my old friend Joseph Pairin Kitingan, the President of Parti Bersatu Sabah (PBS) who is also the Huguan Siou of the Kadazandusuns, to consider paying 'Sogit' to his younger bother Dr Jeffrey, if indeed he has uttered the word 'Mendiang' (the late) on his brother.

If Pairin really and actually did utter the word 'mendiang' on Jeffrey in Beluran as claimed by some, I advise Pairin to promptly do the honourable thing to pay 'sogit' in the form of one buffaloe, a pig and a chicken as is the way of our custom when one utter such word on a living person.

As Chief Custodian of the Kadazandusuns Customs and Laws, Pairin knows best what to do in cases like this. So please be honourable so that everything is balanced again.

(NOTE : Lojingki, 71, was active together with the late Peter Mojuntin in now-defunct UNKO in the 1960s. Lojingki who claimed once a close friend of Pairin and many PBS leaders, had recently joined the State Reform Party (STAR) and was appointed its state committee member.)