WHY SACRIFICE A LIVES FOR MONEY? 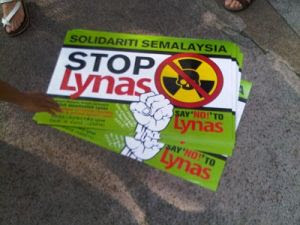 MANY of you must be wondering what is LYNAS. LYNAS is an Australian rare earth mining company. They have a mining and concentration plant in Mount Welde, Western Australian. Outside Australia, they are to build a refinery for rare earth extracted in Australia.

The Malaysian government has given the 'pioneer' status to LYNAS for the construction of this plant in Kuantan, Pahang. Also granted is a 12-year tax exemption. The plant in Kuantan is called Lynas Advanced Material Plant(LAMP).

If completed, it would be the third biggest ore refinery in the world, and the biggest outside China. This plant would thereby meet 30% of the world's demand for the rare earth extracted.

What's the fuss? These ore extract involves the yielding of several thousand tonnes of waste known as gypsum which contains low concentration of thorium, a radioactive substance.

About 20 years ago, Mitsubishi Chemicals built a rare earth plant in Bukit Merah, West of Ipoh, Perak. Till now, the Malaysian government and Mitsubishi are paying the price of the aftermath-300million used to clean the radioactive leftovers that caused 8 workers to die of leukemia.

In June 2011, New York Times reported that AkzoNobel, a Dutch Contractor and a key contractor in supplying resins to LYNAS pulled out of the project stating worries the way LYNAS is taking safety measurements.

Consequences? Thorium causes leukemia if not properly dealt with. Not only that, Malaysians from all around the country will be affected by the content of thorium in the air. In 1986, radiation by the meltdown of the Chernobyl Nuclear Plant in Russia even reached Scotland!

Look at Japan, radiations caused by the atomic bomb dropped in Hiroshima in 1946 is still taking it's toll with birth defects among newborns. In USA, the wastes are dumped and buried hundreds of feet below the deserts of Nevada. Where to find a desert in Malaysia?

The current government is seeking to approve the applications by all means. Why? This is a billion dollar project Najib can boost about. Besides that, LYNAS is also taking advantage of the Malaysian environmental laws, which are known worldwide to be not strict.

Although there's only proof that these radiation causes the death of a few lives and not thousands, the worst in Malaysia being the 8 that died in Bukit Merah, this is proof that the government are only interested in money? Even if it's a few lives, would a caring government sacrifice a few lives for money?