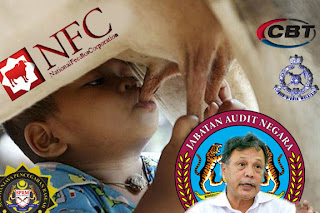 THE NATIONAL Feedlot Corporation (NFCorp) continued to deny any criminal breach of trust (CBT) in its loan agreement with the government, even accusing the police of 'unfairly' pre-empting the charge.

In a statement here, the company even sought to question the motives of CCID director Datuk Syed Ismail Syed Azizan for recommending CBT charges against it yesterday, claiming the police had failed to understand the case’s 'dynamics of the facts and the law'.

“NFCorp therefore wishes to enquire the police if, in their investigations, they had paid enough consideration to the fact that there is total lacking of the elements of dishonesty in this case, which is a primary ingredient of CBT and cheating?” the firm said in the statement.

Syed Ismail yesterday confirmed that the police are to recommend that the Attorney-General’s Chambers charge NFCorp directors with CBT.

The NFC hit the headlines after it made it into the Auditor-General’s Report last year, and has continued to hog the limelight after it was linked to Shahrizat and her family.