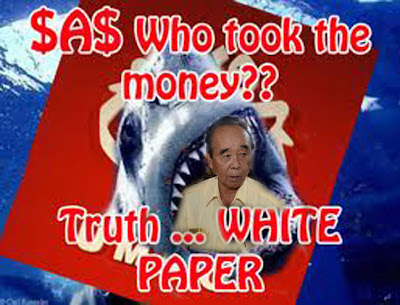 KOTA KINABALU : Today (Monday) at 11.30AM, Sabah Amanah Saham (SAS) unit holder Chin Chow Cheow will lead a group of fellow SAS unit holders to the office of Deputy Chief Minister, Dr. Yee Moh Chai to strongly urge the Sabah State Government to publish a White Paper to reveal truth regarding the loss of RM400 million by SAS and to rebuke to a public statement by Dr. Yee’s uncle, Yong Pek Fong.

Chin Chow Cheow (CC Chin) pointed out that after reading Yong Pek Fong’s article “Analysis on the next Sabah State Election and the choice of Chinese voters” on the 21st of March, it reminded him to revive the plan to seek the truth regarding the huge loss by SAS shareholders.

As Deputy Chief Minister, it would be easy for Yee to urge the state government to publish a White Paper about the SAS loss and to instruct the SAS management to hold the first shareholders meeting to reveal the truth, except I noticed the non-substantiated allegation that Datuk Seri Yong Teck Lee is solely responsible for the SAS huge loss.

Yet Yee and the present state government fail to use all its legal means and procedures to investigate so that truth can be revealed. Therefore, I strongly believe that the real culprits are yet to be unmasked.

It is really a shame that Dr. Yee has to hide behind his uncle Yong Pek Fong to attack Datuk Seri Yong, yet as a Deputy Chief Minister after 10 years and he still fails to improve the price of SAS from that of pisang goring. Yee is hiding the truth from the public just to protect his UMNO bosses and disregards his sworn duty as an elected Assemblyman to protect the interests of the people who have voted for him.

Chin Chow Cheow’s action receives a strong support from one Mr. Chin Sin Hon, the author of “Sabah Amanah Saham, truths; lies; who are lying” and the writer will join the SAS shareholders on next Monday (25th March) to the office of Yee and demand the real culprits be revealed and justice be prevailed.

This will be the third time that SAS unit holders have gone to Yee’s office to demand action from the state government and SAS management, and to apprehend the real culprits who are responsible for the unit holders’ huge loss and not to hide the truth any longer.

Earlier, Tawau SAS unit holder, Chin Chow Cheow launched a signature campaign and received strong unit holders’ support to demand the SAS management reveal the truth regarding the loss of RM400 million. This campaign also called on the state government to fulfill the pledge that “the share will not fall below one ringgit” and to buy back the shares at one ringgit per share.
Posted by sabahkini.net at 08:28