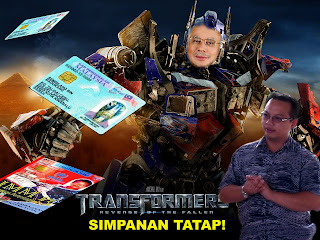 THE STATE Reform Party (STAR) has questioned the sudden turn-around by Prime Minister Najib Razak's stand on whether or not to agree to the setting up of the Royal Commission of Inquiry (RCI) on the large presence of illegal immigrants in Sabah and the rampant issuance of Malaysian documents to these people.

Deputy Chairman of the party's Sabah chapter, Dr Nicholas James Guntobon, in a statement here said Najib's non-committal answer to the issue of setting up the RCI reflected UMNO's second thought on it after a presumed strong objection from Sabah UMNO during his recent visit to Sabah.

He also questioned why must the Plantation Minister, Bernard Dompok, had to explain on PM's behalf on the RCI delay when Najib himself said in Kuala Lumpur yesterday that the RCI was still under consideration, refuting earlier leaked news that the Federal Cabinet had agreed to it.

Najib was supposed or expected to announce the RCI while in Sabah recently but he backed off at the behest of Sabah UMNO who met him at an unscheduled meeting just after the premier met state BN leaders here.

Dr Guntobon said there is contradiction between Dompok's explanation and Najib's. "Could it be the PM's fault? Is Dompok right in saying the RCI announcement delay was due to preparatory groundwork?" he asked.

"Anyway if BN is sincere on the RCI, the PM could just announce that his Cabinet has agreed to the RCI, and this would expedite all the necessary preparatory works Dompok mentioned today.

"Or is this BN's tactic of procrastinating an important announcement and hoped that eventually it would not have to set up the RCI which many believed, if carried out, would expose syndicates that go all the way up to the once most powerful people in Malaysia?" he said.

By dily-dalying an announcement on the setting up of the RCI, departments like police, immigration and army would take longer time to make preparation, Dr Guntobon argued adding that what Sabahans wanted was the RCI to be formed and allowed to carry out investigations before poll is called.

Dr Guntobon also said Najib should also clarify if there is any truth on rumour going round that the deputy prime minister Muhyiddin Yasin had taken a different stand on the RCI by not agreeing to it, therefore holding the premier from announcing it in fear of a backlash within UMNO, especially in Sabah.

"These UMNO leaders should not play around with such an important decision that touches on the very sovereignty and security of this nation..." he added.