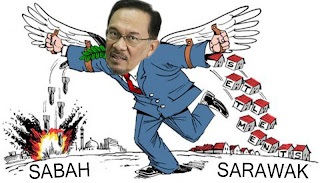 THE cracks in PKR appear to be widening with Vice-President Jeffrey Kitingan accusing PKR adviser Anwar Ibrahim of destroying the peace plan brokered late last year to restore normalcy in the party in Sabah.

Jeffrey said PKR had two options last year: one was to take action against those involved in forming a breakaway party through suspension or sacking; and the second was reconciliation.

He added that the party chose to reconcile and agreed to some of his demands. In return, his 12 supporters agreed to restore normalcy, including withdrawing the application to register a breakaway party, Parti Cinta Sabah (PCS).

"The party cannot now abandon the reconciliation plan and go back to castigating and punishing the people involved. This has reflected badly against decision-makers in the party," said Jeffrey.

Also learnt that Jeffrey has advised Anwar to postpone his scheduled visit to Menggatal, Putatan and Papar tomorrow to another date.

In a statement which he released later in the day, Jeffrey said the decision to recommend the suspension of the 12 was done in bad faith and was a breach of trust.

"The decision by the party's political bureau on Wednesday, after making a reconciliation eight to 10 months ago, reflects badly on the leadership and its sincerity in its intentions, given that it comes just days before the nomination of the party election tomorrow and Sunday,” he said.

He warned Anwar to be prepared for a backlash as a result of this move.

Did Anwar break his word?

In a related development, Jeffrey in an interview with blogger Haris Ibrahim also spoke about how Anwar had reneged on his word.

Yesterday, the PKR disciplinary board recommended that 12 Sabah PKR leaders, aligned to Jeffrey, be suspended for wanting to register PCS.

The 12 had filed the application with the Registrar of Societies, following a leadership tussle last year. They had wanted Jeffrey to lead Sabah PKR.

Following a peace deal, the application was retracted.

Asked if the application to register the new party was raised at the peace talks, Jeffrey replied, “Yes, when it was decided to reconcile, it was also decided that no action would be taken against those who took part in setting up the new party.”

“In return, Thamrin Jaini’s appointment (as Sabah PKR chief) would be accepted whilst there was also an agreement on the appointment of some others, like the secretary and ketua penerangan (information chief), but even this was not implemented,” he added.

On whether the assurance that “no action would be taken” was expressly raised and agreed during the peace talks, he said: “It was agreed to by the Ketua Umum PKR (Anwar). It (the decision) was conveyed to me by the Ketua Umum through a third party.”

According to Jeffrey, the assurance was conveyed verbally as well as in writing.

He also denied the claim that Anwar and other leaders were not aware that the application was submitted to the Registrar of Societies, and at the time of the peace talks, they were under the impression that a new party was merely being contemplated.

The veteran politician was also in the dark about why the party had suddenly decided to make a U-turn on this issue.

“I have no idea, although it does look like it might have to do with the party elections. Somebody complained and now it looks like we are going backward,” he said.

“The 12 have been very honest. They told the truth. They abandoned their plan about a new party after we made a peace plan and we reconciled and then how can this now be done to them? At the time of submission of nomination papers (for the divisional election)? This will disqualify these people. This is not fair.

“We are fighting for justice and democracy. This will in effect deprive these people of the opportunity to exercise their right. It effectively undermines the democratic process in the party,” he added.

Below are excerpts from the interview:

Well, I will cross that bridge if and when we get there. Right now, what I would like to suggest to the leadership is to withdraw the decision and to resume party activities. After all, a decision had been made 9 or 10 months ago that we make a peace plan and we reconcile.

Are you therefore urging the party leadership to look at the bigger picture and push forward with the peace plan?

Yes. To me, whatever they are doing now is already irrelevant because a decision had been made to reconcile and make a peace plan and we have moved along that line for about a year already. Are we now going backward and say, 'throw the peace plan away?' Where is the direction? The party has earlier made a decision and they should stick to that decision.

Would you say that this latest development puts PKR Sabah in a very precarious position?