SABAH A DAUNTING CHALLENGE FOR ANWAR

The visit proved that Sabah and Sarawak could be more than a bundle of contradictions for PKR, just as Sabah Umno is discovering for itself. This is where the local actors should be given free rein.

The sequence of events from Anwar's arrival at 12 noon yesterday to his quiet departure at 7 am this morning shows that he should have erred on the side of caution with a state where anything goes in politics.

Something was amiss. There were no kompang or drums this time, no traditional dancers or banners and no busloads of the party faithful upon his arrival. In the end, he put up with the indignity of an unusually cool reception at the Kota Kinabalu International Airport arranged surprisingly by Jeffrey's protocol aides. The party national vice-president Jeffrey himself was nowhere in sight. 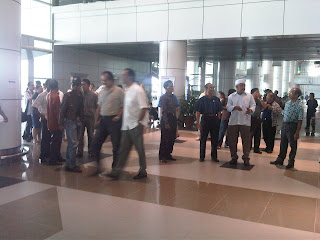 Anwar later sheepishly told the local press that Jeffrey was busy in Pensiangan where it was nomination day for the divisional posts. Pensiangan doesn't go to the polls until Sept 5.

The local press did not point this out. It is only widely known that the 25 divisions in Sabah are holding their nominations either today or yesterday. Pensiangan being in a remote location near the Indonesian border is the sole exception.

Sabah chief Thamrin Jaini, a Bajau-Suluk appointed last year by Anwar in preference to Jeffrey, a Dusun, was dutifully in attendance at the airport to greet the boss. He came and greeted Anwar with mock politeness and promptly left, leaving the former to fend for himself. Jaini did not get the state party headquarters to arrange, as per protocol, Anwar's schedule and in that respect failed to discharge his duties as state chief.

Clearly there are some people who are unhappy that 12 Sabah leaders facing the possibility of official suspension today from the party have not been summarily sacked, as they demanded.

These same people want Jeffrey summarily sacked as well, seeing him as being behind the errant 12. Repercussions are expected to spill over to Sarawak in such a move.

Anwar, in an ironic turn of events, was driven by Penampang division vice chief Bernard Solibun, a pro-Jeffrey activist, to his overnight stay at the Shangri-La Resort. The bill for Anwar's entire trip, including for his aides and bodyguards, was charged to Jeffrey and not the state party headquarters.

To add insult to injury, the Sepanggar division cancelled a ceramah they had arranged for him last night at 9 pm because they couldn't guarantee that anyone would turn up. Jeffrey was however present to console Anwar.

Daniel John Jambun, one of the 12 Sabah activists and a noted hawk, is among the aspirants for the post of division chief. He's also deputy chair of the party's powerful KadazanDusunMurut Task Force, a hornet's nest led by Jeffrey. Daniel has the dubious distinction of being the pro-tem president of the aborted Parti Cinta Sabah (PCS).

The Sabah strongman didn't attend the State Leadership Council (SLC) meeting in the afternoon chaired by Anwar at the Borneo Paradise Resort owned by a Jeffrey supporter in Kinarut. Between his arrival at Shangri-La and the time he left for the SLC meet, Anwar had no visitors.

Anwar must thank Jeffrey for putting in an appearance, albeit at the tail end of the brief press conference after the SLC. Jeffrey, despite being shabbily treated by Anwar in recent months, kept him company during the breaking of fast that followed.

The ceramah that preceded it saw a low turnout of fewer than 300, a snub on Anwar.

The differences between Jeffrey and Anwar are clear. The former has captured the moral high ground and see the latter as having betrayed – through the suspension - the peace plan of Dec 13 last year that was meant to reconcile the differences in the local chapter.

Jeffrey however must acknowledge that Anwar, rightly or wrongly, has started a process in the party that must be seen through to the end, no matter how bitter.

Jeffrey must bring with him today to the CLC meet, a legally crafted and signed presentation that makes it difficult for the disciplinary committee's suspension recommendation to be upheld. Otherwise, his men will be history.

Earlier, during the SLC meet, Anwar reportedly gave a blow-by-blow account of the sequence from the time from before Azmin Ali's sacking as Sabah state chief by the majority of the division chiefs to his visit yesterday. He will not convince the majority since his version varies from that accepted by the party faithful.

Anwar must give the benefit of the doubt to the statement in the local media by the 12 on Dec 4 last year that they in fact “withdrew” the application to register PCS within 24 hours of Dec 3.

Too much should not be made of the claim by the complainants - the four division chiefs opposed to Jeffrey - that the Registrar of Societies (ROS) did not record any such withdrawal. If so, the ROS could just be playing politics with the issue. There's no reason for the ROS to advise PKR on Aug 12 that the application to register PCS had indeed been lodged by the 12 named.

Anwar's credibility in the issue is also under question since he now can't remember whether the peace plan covered PCS or otherwise. To his credit, he has left open the possibility that the entire disciplinary process against the 12 could have been flawed, beginning with the complaint by the four division chiefs in June.

Harry Manicit from Kudat for example, one of the 12, claims that he was not even a member of PKR until Jan 6 this year. He conveyed this fact to the disciplinary committee last Wednesday in Kota Kinabalu.

The PKR Advisor has wisely hinted, based on what he told the SLC, that the proposed suspension of the 12 may be reduced by the CLC or the president, upon appeal, to a written warning in a bid to bring the troubled chapter to an end.