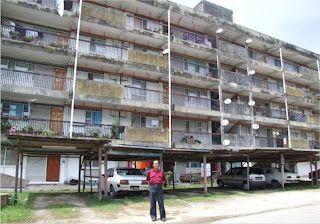 There are three apartments for government staffs and two for the nurses working or training at Queen Elizabeth Hospital. One of the apartments appeared run down and abandoned. The other two looked like they need a fresh paint and massive repair work. 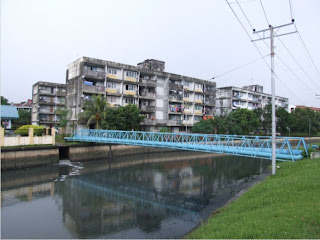 UGLY… the ugly appearance of the government apartment seen from the KK-Penampang road. The blue-coloured pipes crossing the monsoon drain is popularly used by nurses to cross over to the hospital and back.

Sabah DAP called on JKR to quickly repair and paint these apartments where majority of the occupants are staffs of JKR and their dependents. We saw the ugly side of these apartments. There is leaking everywhere and the concrete stairs were chipping off.

The abandoned apartment must be quickly looked into. It looks like it has the same fate as the Queen Elizabeth hospital building a stone throw away. These apartments are visible from the KK-Penampang road and they definitely do not give a good impression of Kota Kinabalu city.
Posted by sabahkini.net at 20:18