WHEN MENGGATAL FLOOD TO BE SOLVED? 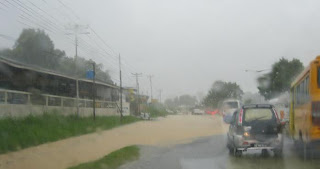 SABAH DAP has called on the relevant authorities to find immediate solution to the endless flood woes in Menggatal areas. Jeffrey Kumin, the DAP Sepanggar chairman received numerous complaints regarding the flood problem from the concerned public who wanted to know when will this problem be solved.

According to regular flood victims whose cars were jam for hours along mile 7 jalan Tuaran, they have to endure this ridiculous journey every time there was heavy downpour of rain even though for a short time the whole road will be flooded. "This flood problem has been going on for years and yet no concrete solutions were found" according to Kumin.

"Not only commuters plying this road were greatly affected but also primary students from SRJK Lok Yuk Inanam lives are at stake because after school, they have to to walk out from their school to a nearby bus station, and they have to pass through one to two feets high of water to reach the bus-stop," said Kumin in a statement yesterday.