FLASHPOINTS ON THE HORIZON? 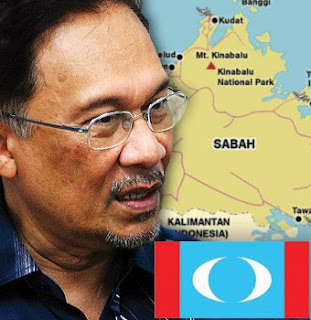 The de facto party chief put his signature to the peace plan in December, witnessed by several party seniors. He personally emailed it out to all parties concerned two weeks before Christmas in the run-up to the year-end festive cheer.

He never complied with the peace deal and evidently broke every promise he made to the Sabahans with one sole exception. He appointed Kota Kinabalu division chief Christina Liew Chin Jin Hadikusumo as deputy state chief.

In any case, he did so very reluctantly. His wife and PKR president, Wan Azizah Wan Ismail, appears to have been instrumental in Liew’s appointment to her old party post.

Now, it appears that Anwar is going for broke in the state on the eve of party elections in a bid to influence the outcome of voting in favour of his proxies and vice president Azmin Ali who is eyeing the Deputy Presidency.

Both Wan Azizah and daughter and Lembah Pantai MP, Nurul Izzah, beg to differ with Anwar, according to insiders at PKR headquarters. They have the backing of Pakatan Rakyat chairperson Zaid Ibrahim and PKR deputy president Syed Hussin Ali, both aligned against Azmin.

It appears to be a foregone conclusion that all 12 will either be expelled or suspended for anything between two months to two years despite there being no hard evidence against them.

This will take them out of the running this time i.e. if they are not expelled. Nominations for all divisional posts will be accepted on Aug 28 i.e. next Saturday or three days after the disciplinary committee meeting. Voting will take place on Sept 18 for some divisions in Sabah and for the remainder on Sept 19.

The explanation from the 12 activists was simple. Twenty-four hours after they submitted the application to register PCS, they withdrew it after hearing from PKR headquarters that a peace plan was in the works. They were also assured by the party top brass that Vice-President Jeffrey @ Gapari bin Kitingan’s resignation from his post will not be accepted.

Besides, it was pointed out to the twelve that Jeffrey still remains a member of the party and Keningau Division Chief. Christina Liew also sent in her resignation from the National Political Bureau but remained with the party.

In any case, all the assurances from party headquarters were sufficient to stem an anticipated mass dissolution of PKR divisions and their exodus from the party.

Papar division even announced their dissolution. However, it was put on hold for two weeks to give time to party headquarters to heal the growing rift in the Sabah chapter over Anwar’s arbitrary appointment of Libaran Division Chief, Thamrin Jaini as Sabah State Chief. He replaced Azmin Ali who was booted out by a majority of the Division Chiefs who expressed no confidence in the Gombak MP.

The 12 had planned to invite Jeffrey to head PCS as another party in PR after his controversial “I have burnt my bridges” statement in the local media. This followed his resignation which was emailed to Anwar, Wan Azizah, Syed Hussin, then secretary-general Sallehuddin and web news portal Malaysiakini.

It is not known how Jeffery is taking the news on the 12 activists who include Division Chiefs who picked him as Sabah State Chief to replace Azmin.

During a National Political Bureau meeting at the party headquarters earlier this month, Jeffrey was assured by Anwar himself that the show cause letters were a mere formality in response to party members in Sabah, read his proxies crying for their blood, according to senior aides. “Anwar’s proxies in Sabah want to see the 12 eliminated so that they will have an easy ride.”

Division chiefs aligned to Jeffrey are generally in favour of ‘sacrificing’ the 12 in a strategic retreat in order to bid their time. They point out that the 12 have their own supporters who are willing to step in and fill the vacuum. Their worry is that they had too short a notice on the disciplinary committee meeting which is just three days short of nomination day.

The mood among the 12, it is believed, is one of utter disappointment with Anwar personally.

Former Sabah PKR state secretary Kanul Gindol chuckles that he warned the 12 some months ago that “Anwar had something up his sleeve for the last minute…surprise!” Kanul, “speaking from bitter experience”, believes that “Anwar doesn’t say what he means and doesn’t mean what he says”.

There are any numbers of senior PKR members urging the 12 to brace themselves for the worst and not hope for the best. Their best advice to the 12, in the event of their expulsion from the party or a long suspension, is to leave and resume from where they left off with PCS. If PCS enter the elections in the state without reaching an agreement with PR, the BN is likely to win by default.

The pending action against the 12 is the clearest indication that Anwar has his eye on Putrajaya only. For this he only needs ten parliamentary seats in Sabah and a similar number in Sarawak. He fears that the 12 hauled up for disciplinary action may jeopardize his limited objectives in Sabah and Sarawak with their constant emphasis on Sabah rights.

There are also allegations that members are still being accepted into the party after the July 24 cut-off point for the coming party elections.

(The views expressed here are those of the writer and do not necessarily represent the views of Sabahkini.net and/or its associates.)