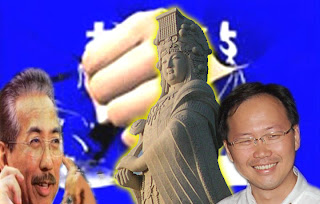 THE State BN meeting held on 24 August 2010 was supposed to be a forum for all component Parties to raise, deliberate and resolve issues. Liberal Democratic Party attended the meeting with the intention of resolving issues in the spirit of Barisan Nasional.

When faced with conflicting views, we were prepared to reason and rationalise matters with the hope of arriving at solutions for issues concerning Barisan Nasional or public interests, no matter how sensitive those issues are.

In the meeting, LDP brought up two issues. Firstly, are ongoing and completed development projects without having obtained prior approval of the Central Board illegal? Although this question came about because of the Mazu case, it is a separate issue. One of the defences relied by the State Government in the case was that the Mazu project did not obtain prior approval from the Central Board, it is therefore illegal.

Before April 2008, Central Board approval was never required for development plans except those involving changes in the zoning. Coincidentally, while the Mazu case was ongoing in court, such practice was changed by the Government thereby requiring Central Board approval for all projects, including building a house on private land.

The Government now owes the people of Sabah an explanation whether all buildings throughout the State completed without Central Board approval are illegal. The result can be disastrous! This is clearly an issue of public importance, as opposed to personal interests. If LDP is championing personal interests, why would we talk about this to the dislike of the Chief Minister?

We felt insulted for being arbitrarily stopped when seeking to raise such issue in the meeting.

The second issue raised was pertaining the termination of the positions of the 8 community leaders initiated by the Kudat District Chief behind my back. This is not an isolated case, it has happened to many other Assemblymen from other component Parties.

In view of the clear contravention to the accepted practice of the BN Government that termination and appointment of such positions are done through the State Assemblyman unless he is an opposition member.

Together with the concrete evidence in the form of audio CD that the District Chief sabotaged me as the BN candidate in Tanjong Kapor in the 2008 election, the decision of merely giving him a warning is incomprehensible and unacceptable.

The fear of him joining the opposition should not deter him from being sacked, otherwise it will encourage backstabbing in BN.

LDP Deputy President Datuk Chin Su Phin has every reason to declare that the Party can no longer work with the Chief Minister. The Party stands by what he said.