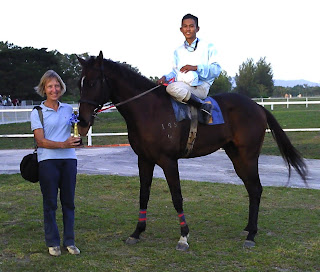 PONIES….Kinda Delago, one of the favourite ponies to watch for on this coming Tuesday Merdeka Cup race.

THE Royal Sabah Turf Club (RSTC) Merdeka Cup races on Aug 31 might mark yet another new milestone in the state’s pony racing, with the introduction of high definition (HD) cameras on its racetrack at Tambalang Race Course in Tuaran.

He said the move was in line with the present Management Committee’s commitment to boost the facilities and system, after it took over the Tambalang Race Course last year.
He further noted that landscaping improvement had also been done on certain part of the areas at the racecourse.

“This effort will be on going and the RSTC Management Committee will continue to work to boost pony racing standard in Sabah to those of international standards,” he asserted in a statement here.

He then noted that in the run up to the Merdeka Cup, 10 races had been handicapped for Sunday that is for Class 7 Division Two, Three and Four.

On Sunday, he said big payout is expected with some upsets as the ponies have been equally handicapped.

In conjunction with the Merdeka Day, Lim said nine races handicapped are on the card for Class 7 Division Two and Four as well as Class 5 and Class 3.

The main races on Tuesday would be the Class 3 and Class 7 Division 2, both over 1,800m.
In Class 3, he said among the ponies to watch for the Merdeka Cup are Kinda Delago, Barbero, Royal Chip and Myth Territory.

He however cautioned that one must not ignore the challenge from Magic II, Nikki Dream, Store Yard, Zakarad II, Battle King III, Yang Tinggi II, Mystical and Hong Kong Crystal in Race 8.

Lim went on to note that the total stake money for these two races are RM24,000 plus trophies.

Other highlight included the popular Buffalo Race, which is slotted for the last race of the day.

He also disclosed that on Tuesday a school brass band would be on hand to cheers the patrons and punters as well as giving a feel of the Merdeka spirit.

Besides that there would be 12 Bajau horsemen mounting on full attire with the Jalur Gemilang around the course on that day, to give photo opportunity to the people, particularly tourists.

Lim also advised punters to keep their racing guide and watch out for the lucky number printed on it, as they would be lucky draws, which will be announced in between races.
“There will be 20 hampers to be given out to the lucky punters,” he said.

He also reminded the full and life members to wear their badges when entering the VIP rooms at the course to be verified by the security manning the doors.

“While for the invited guests, we have special badges for them too,” he said.

On another note Lim reminded pony owners that there would be a measurement session on Sept 15 for all ponies from Class 6 to Class 1 beginning at 10am in Tambalang Race Course.

In addition to this, he also announced that the RSTC Annual Dinner this year would be held at Grand Ballroom Pacific Sutera on Oct 1 beginning at 7pm.

The main highlight of the year, which is the Gold Cup would be held on Oct 3 and all trophies would be presented at the course.

“The Management Committee wishes all its members and valuable punters to have a wonderful Merdeka Day,” he said.
Posted by sabahkini.net at 22:31