NO JUSTICE FROM ‘JUSTICE SEEKERS’? 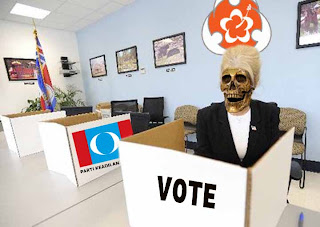 SABAH PKR appears set to rock again. No justice for Sabahans from ‘Justice Seekers’, Dato Seri Anwar Ibrahim by introducing so many loopholes in PKR Election.

Loopholes means widespread fraud during Sabah PKR polls. It's easy to win a post during the forthcoming Sabah PKR divisional elections on Sept 18 and 19. All one has to do is to copy names from the electoral rolls, especially illegals and enter them in the membership register for the routine approval of the party headquarters.

On voting day, all the candidate has to do is, to ferry in busloads of poverty-stricken illegals, for a fee, to the voting centre and voila victory by a landslide. This has happened before, during the 2007 AIMs and is set to happen again.

Each of the 25 divisions in Sabah and one in Labuan claims to have anything up to 3, 500 members each. This is a record 100 per cent rise in membership since 2007. It appears that some Sabahans can’not get away from their habit of enlisting the help of the illegal immigrants whenever the polls are here.