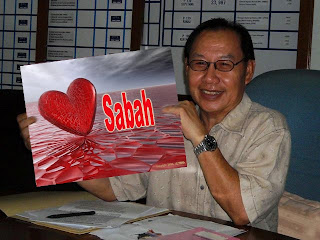 The application to register PCS was reportedly filed with the Registrar of Societies (ROS) in Kota Kinabalu on Dec 4 last year by ‘16 rebel’ Sabah PKR division chiefs.

A probe against Jeffrey was the impression 12 party activists named in the PCS pro-tem line-up gathered during their individual grilling by the disciplinary panel. Eight of the 12 are said to be bidding for the divisional chief's posts.

Nominations close on Aug 28 and polling will be on Sept 18 for some and the others the next day.

The inquiry committee, headed by Sharifah Halimah of the party's Central Leadership Council (CLC), appeared to lose interest in the proceedings once they established early on that Jeffrey was not involved in the formation of PCS.

The 12 included Daniel John Jambun, the Deputy Chair of the powerfull KadazanDusunMurut Task Force who was the last to be grilled. His session with the inquiry committee, surprisingly lasted less than 10 minutes, unlike the others whose sessions lasted at least 30 minutes.

Penampang division Vice Chief, Bernard Solibun, who was not among the 12 originally summoned, was also asked to meet with the inquiry committee. It is not known what he brought up at the inquiry.

The 12 interviewed did not stay around to be interviewed by the press. It is learnt that the inquiry committee cautioned them against issuing any press statements.

According to reliable sources, none of the 12 interviewed implicated Jeffrey in the formation of PCS. However, they conceded that he was instrumental in getting them to withdraw their applications a day after it was lodged.

Asked the reason behind Jeffrey's move, the 12 explained that the PKR vice president cautioned them against the dangers of splitting the opposition even further.


He reportedly stressed that only the PKR, and by extension Pakatan, could take on the might of Umno and Barisan Nasional and that any difference with party headquarters on local issues could be taken to the negotiating table.

"The common enemy is Umno and the BN," Jeffrey reportedly advised them.

The 12 explained that they decided to go ahead with the formation of PCS after Jeffrey sent in his resignation as vice-president and member of the National Political Bureau (NPB) to the party headquarters. Jeffrey, however, remained as party member and member of the CLC, from which he took three months sabbatical leave, and as PKR Keningau division chief.

The 12 reportedly hoped to persuade Jeffrey to join them after the party was registered in four months' time, as they planned to apply for membership in the Pakatan Rakyat.
The best interests of Sabah, the 12 felt, would be well served by a local party and not one imported from Peninsular Malaysia. They feel that alternatively, PKR should incorporate itself locally in Sabah.

The inquiry committee wanted the 12 on the carpet to explain the Common Interest Group Malaysia (CigMA) and the Borneo Heritage Foundation (BHF), two NGOs headed by Jeffrey.

They also queried why a July 31 Malaysia Agreement Forum in Kota Kinabalu was hosted by the two NGOs and not by PKR. It was explained that the forum was a non-political event meant to reach across the divide.

The inquiry committee, it is learnt, also delved into local issues and grievances within the party.
Posted by sabahkini.net at 10:50