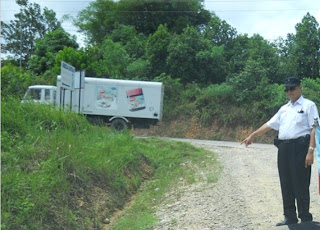 DR BENJAMIN Yapp, Sabah DAP Parliamentary Liaison Chief for Keningau and Tenom commended on the recent actions taken by the Keningau District Council after the media report on the damaged access road to Taman Lingkudau, Keningau that appeared in the local news paper through the Hotline.

This was what the local community wanted to see improvement to be made from time to time, commended Dr Yapp after he revisited the site to follow up with his previous public complaints to the authority concerned.

However, Dr Yapp regretted that after his further revisit to Kampung Kuangoh, Bingkor, he found out that the semi gravel road conditions there remained the same as before even though he had brought the issue to the attention of the Government.

He received numerous public complaints from the rural people that the road conditions along Kampung Kuangoh leading to various kampungs have never been improved for many decades.

The villagers and school children at the various villages have to bear with the problems of dust pollution during dry weather condition and the muddy conditions whenever it rains. The picture shows the bad road conditions that remain unresolved. Sabah DAP questioned the authority concerned for failure in maintaining and upgrading the roads despite of the huge allocations of funds as promised by the Government that have yet to be fulfilled.