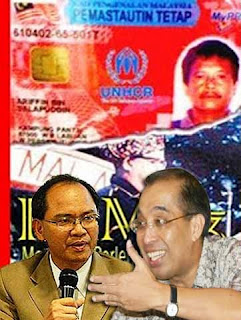 THE United PasokMomogun KadazanDusunMurut Organisation (Upko) has reiterated its support for the stand of its president, Bernard Giluk Dompok, that Umno is a hindrance to 1Malaysia.

This is not being ‘irresponsible’ as alleged by Sabah Umno, stressed Upko secretary-general Wilfred Madius Tangau.

"It's unfortunate that Sabah Umno deputy chief Salleh Keruak is not reading the pulse of the people," said Tangau in deploring the former's statement on Tuesday that Dompok has issued an ‘irresponsible’ remark on Sunday in Kota Kinabalu. ‘Salleh is not seeing the picture as it is.’

He attributed the recurrent polemics in the media between Umno and its allies in the ruling Barisan Nasional (BN) coalition as due to the fact that the state chapter never meets formally.

There are burning questions over Umno's commitment to 1Malaysia, continued Tangau, in the minds of the people and even BN leaders, besides the opposition.

He added that no one is assured by Salleh's take that Umno thoroughly comprehended the 1Malaysia concept and is fully committed to the policy.

He pointed out that Perkasa, the Malay rights NGO, has vehemently opposed many of the recommendations of Prime Minister Mohd Najib Abdul Razak's Economic Transformation Plan (ETP) as contained in the New Economic Model (NEM).

This, according to him, has stalled the work on the ETP under the direction of Amirsham Abdul Aziz (left) of the National Economic Advisory Council (NEAC). "It (Perkasa) has also stalled the programme formulations on the NEM under Pemandu headed by Idris Jala."

Citing other objections, Tangau referred to former prime minister Dr Mahathir Mohamad taking digs in public at the 1Malaysia policy. Taking the cake, he stressed, was Deputy Prime Minister Muhyiddin Yassin's stand that he was a Malay first and a Malaysian second ‘when publicly crossing swords with Najib on 1Malaysia’.

Upko also sees Umno running foul of the 1Malaysia concept in the way that it practiced the Barisan Nasional"s (BN) oft-hailed ‘power-sharing’ formula. This ran counter to the coalition's spirit of consensus and compromise, he ventured.

"Power-sharing is the core principle of the BN coalition," reminded Tangau. "This was said by Mahathir during his time as premier when he solemnly pledged that Umno would not contest more than half the seats in Sabah."

Mahathir, it is recalled, spoke so much in Sabah about power-sharing, the BN spirit, harmonious politics, and loyalty to friends, among others. "All these assurances mean nothing today".

He cited the ongoing Kimanis to Bintulu gas pipeline from Sabah to Sarawak as one example of the federal government breaking its promise not to proceed with the project so that the gas could be utilised locally in the state.

Tangau also took issue with Umno's continued silence on the issue of illegal immigrants in Sabah, as it was ‘a stand that doesn't augur well for 1Malaysia’.

"If Umno is sincere on the issue as Salleh claims, he should advise the state government to stop renewing every year the IMM13 documents of the 84,000 refugees in Sabah," said Tangau.

"It's not the done thing on the one hand to preach 1Malaysia and at the same time not to discourage the influx of illegal immigration and refugees."

The Upko secretary-general belaboured the point that Malaysia is not a party to the International Convention of Refugees. He queried the continued existence of the growing refugee settlements in Buronuon, Telipok, Kinarut, Lahad Datu, Sandakan and other places. Meanwhile, the United Nations High Commissioner for Refugees (UNHCR) has long disbanded its unofficial operations in Sabah and left the state.

Upko Putatan chief Marcus Mojigoh did not mince his words when he warned Umno not to think that it has the strength to step on smaller parties in the coalition.

"Don't hurt the feeling of the KDM and the Chinese with all sorts of statements," said Mojigoh. "This is no small matter. Don't spark their anger."

However, the Putatan MP cautioned his party members not to rush into making any decision to quit the coalition.

Mojigoh also advised Umno to solve the 'Allah' issue in line with 1Malaysia and step up Borneonisation of the federal civil service in Sabah and Sarawak.

He noted that nearly fifty years after Malaysia, the civil service in Malaysian Borneo was still overwhelmingly dominated by officers from peninsular Malaysia.

Borneonisation, however, must not mean Islamisation, Muslimisation and exclusiveness within the local context, he said.

Otherwise, it is reckoned, the struggle for Borneonisation and inclusiveness will have to be fought all over again to end the continued marginalisation of the non-Muslim bumiputera, non-Muslims and the non-bumiputera in the federal civil service, he added.