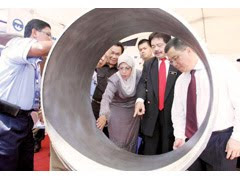 SAPP hails the brave actions of our Sabah government officers, NGOs like SEPA and Green Surf, the people of Lahad Datu and villagers of Kg. Sinakut who have won the battle to stop the controversial coal power plant proposal.

After the victories at Silam Lahad Datu in 2008 and Seguntor Sandakan in 2009, the latest victory at Sinakut Tungku in Lahad Datu shows that the people of Sabah can indeed beat the bullying of big federal corporations like Tenaga Nasional Berhad and their political masters.

If the government had listened to the people and abandoned the coal plant idea earlier, then everybody would have been saved a lot of time, money, energy and anxiety. The people of Sabah now expect and demand that the BN Government builds a 300MW natural gas power plant in the East Coast of Sabah without further delay.

This can be done by building a gas pipeline from Kimanis to Sandakan or Tawau. A 300 MW gas power plant costs RM 1.2 billion, much less than the RM1.7 billion, 300MW coal-fired power plant, is cleaner, cheaper and faster to build. As a comparison, the 500 km Sabah Sarawak Gas Pipeline costs RM 1.6 billion. A gas pipeline from Kimanis to either Sandakan or Tawau, whichever is more viable, will cost much, much less.

But if the government refuses to build a pipeline from Kimanis to Sandakan or Tawau, it should build two or more gas power plants, of 300MW or bigger capacity, at Kimanis. The electricity generated can be transmitted to the East Coast via the 275 Kilovolt East-West Interconnection Project linking the West Coast Grid to the East Coast Grid that was completed in 2007. This is sensible because that was the reason why the government spent hundreds of millions to build that East-West Interconnection Project in the first place.

SAPP calls on the BN State and federal leaders to really look after the interests of Sabah in the remainder of their term of office instead of worrying only about their jobs, perks and other benefits. They must realize that their follies have caused much losses to the Sabah economy. For instance, in April last year (2009), the then Minister of Industrial Development, Datuk Ewon Ebin and Minister of Resources and IT, Datuk Dr. Yee Moh Chai, practically became accomplices in the economic sabotage of Sabah when they happily launched the factory that produces the pipes used to take our gas to Bintulu. Datuk Yee was ignorant that Sabah Energy Corporation, a State agency under his ministry, could have made good use of the gas for Sabah’s benefits.

Further, earlier this year, Sabah lost a RM 5.3 billion solar panel investment by Sun Bear Solar, an American company that could have created 1082 jobs in Sabah. The investment needed 42 million cubic feet of natural gas for its electric power. But the investment was aborted because the gas is now going to Bintulu. Isn’t this a direct loss to Sabah?

Another folly, the current Minister of Industrial Development Datuk Raymond Tan said that Petronas would only agree to let Sabah keep a portion of our natural gas if Sabah has its infrastructure and manpower to support the oil and gas industry. I had never imagined that a Sabah Minister can make such foolish statement. How can Sabah build up its oil and gas industry when our gas is piped away to Bintulu? No wonder the Petronas big wigs think our Sabah leaders are fools!

Raymond also announced a 4000-acre oil and gas park in Sipitang to be “kick-started as soon as possible”. This is 16 times the size of the Kimanis site. Where is the manpower and infrastructure that Petronas has imposed as a precondition for Sabah to keep our own gas? Where is the gas going to come from?

Everybody knows that Petronas will pipe the maximum volume of gas through the RM 1.6 billion Sabah Sarawak Gas Pipeline to its Liquefied Natural gas (LNG) plant in Bintulu. That capacity of that LNG plant is 25 mtpa (million tons per annum), the single biggest such plant in the world. It is undergoing expansion. Other than Japan, it has contracted a new buyer of LNG, China, last October, giving Petronas billions in profits from this investment.

As for the oil and gas to be pumped from oil blocks L and M, the gas is going to Miri, not Sipitang. Sarawak is way ahead of Sabah on tapping the oil and gas from Blocks L and M, which Malaysia had mysteriously surrendered to Brunei last year. Without oil and gas, the 4000 acres in Sipitang is more like a mega real estate project that will quickly use up more State funds, the RM 544 million bond and loans by Sabah Development Bank, benefiting a few people.

At the federal level, the only minister who has shown concern, Tan Sri Bernard Dompok, had fallen victim to the sweet promises of the then Prime Minister (Dato Seri Abdullah Badawi).

Tan Sri Bernard repeatedly said Tun Abdullah had guaranteed that only surplus gas will be piped to Bintulu. It is a folly to believe Tun Abdullah Badawi. Tun Abdullah had chosen the 23rd PBS Congress in November 2008 to refute the UPKO President’s (Tan Sri Bernard’s) call for the scrapping of the gas pipeline. This is classic divide and rule used against Sabah’s interests. It was with very good reason that SAPP had declared no confidence in him.

Similarly, with the latest squabbling over seats allocation and economic benefits in the BN coalition, what is going to happen is that the various Sabah BN component and UMNO leaders will rush to KL to lobby and seek favours. This intensifies the divide and rule of Sabah by their political masters in Putrajaya. This is the subservience of Sabah leaders to their political masters that is detrimental to Sabah’s interests such as the loss of our oil and gas while our leaders squabble with each other.