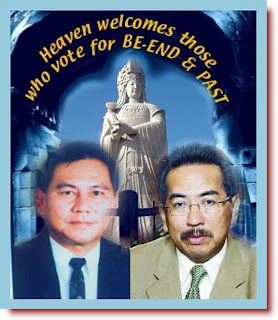 CHIEF Minister Musa Aman said it was unfortunate that the Liberal Democratic Party (LDP) chose to bring up the Mazu statue case at the recent state Barisan Nasional (BN) meeting, here. He asserted that the Mazu case had already been decided by the highest court in the country.

On July 26, the Federal Court in Putrajaya turned down a request by former Sabah chief minister Chong Kah Kiat to appeal against the state government's decision to reverse the approval for the construction of a 108-ft high Mazu (Goddess of the Sea) statue in coastal Kudat town.

"As BN leaders, we should come together at a BN meeting with goodwill and with the intention of putting the interest of the people first, not personal interest," he told reporters after handing over Raya goodies to heads of security agencies as well as the Fire and Rescue Department in Sabah at Tun Raffae Auditorium, Menara Tun Mustapha, here, today.

Musa, who is state BN chairman, was commenting on LDP deputy president Chin Su Phin's shocking announcement yesterday that the party could no longer cooperate with Musa.

Chin was also quoted as saying that the LDP would continue to support and work together with Umno in the ruling coalition, and expressed full support for Prime Minister Najib Tun Razak and his 1Malaysia vision.

"As far as I am concerned, the BN meeting was conducted in an amicable manner. It was a productive meeting and it was very cordial," Musa said.

"Most of the BN leaders expressed their views and suggestions on issues with the welfare or interest of the people in mind, such as land and illegal immigrant issues. I listened and explained where needed," he added.

Earlier, Musa said the handing-over of Raya goodies had become an annual tradition for the state government to show its appreciation for the security forces for their services.

"It is our way of saying 'thank you' for their commitment in ensuring peace and security," he said. (BERNAMA)