ANWAR HAS CROSSED THE LINE IN SABAH 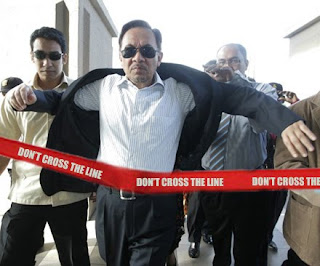 IT'S amazing that the three-member PKR disciplinary committee, headed by Sharifah Halimah, took just a few hours to find 12 senior party activists in Sabah guilty and to recommend that they be suspended for a year.

Their crime: filing an application one mid-morning to register a new political party, Parti Cinta Sabah. The fact that they withdrew the application before the very next day was out, after receiving various assurances, including one on a delayed peace plan, seems to be beside the point.

The filing of the application is considered to have brought disrepute to the party and damaged its image in the public eye. This is a classic S Samy Vellu line of attack. It's easy to crucify anyone once magical terms such as "bringing disrepute" and "damaging the party's image" are uttered. Nobody escapes punishment, for such charges are considered heinous crimes.

The National Political Bureau (NPB) which met on Wednesday afternoon before the disciplinary panel flew back from Kota Kinabalu, left it to the PKR central leadership council (CLC), which meets on Sunday, to decide on the fate of the 12. Jeffrey missed the NPB meet because he had earlier been told that it would be at 8pm.

The CLC is likely to pass the buck to party adviser Anwar Ibrahim, who in turn is expected to recommend to president Dr Wan Azizah Wan Ismail that "she has no reason to interfere with the recommendation of the disciplinary committee".

Déjà vu? It reads like a familiar script being played out these days in the courts, especially in the Court of Appeal and the Federal Court.

It was learnt from a high-ranking source at the PKR headquarters that both Anwar and Azmin Ali argued for expulsion of the 12 during the NPB meeting. Senior PKR leader Chui Jui Meng and party director of strategies Tian Chua in turn argued against the suggestion and pointed out that it went against the peace plan that they had put together.

In any case, it was unethical of PKR secretary-general Saifuddin Nasution to announce the suspension even before the CLC met to deliberate on the matter. This doesn't reflect very well on a party whose middle name is keadilan (justice).

The hand of Anwar can be seen in all these, even though he's faulting the anti-Jeffrey Kitingan camp in Sabah for taking the matter to the disciplinary committee. He even went so far as to assure Jeffrey several times that nothing untoward would happen to the 12.

Anwar knew about PCS on Dec 6, upon his return from Australia. He then approved the peace plan, which was finalised the same afternoon at the Eastin Hotel in Petaling Jaya. The plan was agreed to by Jeffrey and five others and witnessed by three senior PKR activists - Chua Jui Meng, Michael Bong and David Yeo.

The plan was only partially implemented later in the month. However, Anwar told blogger Raja Petra Kamaruddin last week that he only knew about PCS in June this year, which was why the peace plan did not cover it.

The fate of the 12 on flimsy charges - "which should be overthrown on appeal" - raises the question why numerous complaints from Sabah PKR members on other disciplinary issues have fallen on deaf ears at the party headquarters.

Many of these cases involved serious charges such as criminal breach of trust, outright swindling, misuse of funds, padding the membership register with names from the electoral rolls, registering members after the July 24 cut-off date for the coming party elections, phantom members, voting by non-members, impersonation as divisional chiefs and outright racist remarks.

PKR vice-president Azmin Ali was accused of promoting 'Ketuanan Melayu' - Malay supremacy - in Sabah, playing footsie with MyKad-carrying illegal immigrants who are on the electoral rolls and practising nepotism, cronyism and collusion in Sabah, as well as mocking the idea of state rights.

Nothing was done about the litany of complaints against him, forcing 18 of the 25 divisional chiefs in Sabah to bring a vote of no confidence against Azmin and vote in Jeffrey as the new Sabah PKR chief.

Anwar did not accept Jeffrey's democratically-elected appointment and - in violation of the party constitution arbitrarily appointed Thamrin Jaini, the Bajau-Suluk divisional chief of Libaran, to replace Azmin as Sabah PKR chief.

Anwar himself, party members in Sabah and Sarawak point out, has brought disrepute to the PKR and damaged its public image in other ways by inviting, for example, the sodomy charges against him and not implementing the peace plan that he approved for Sabah PKR in the wake of Thamrin's appointment.

Anwar has quarrelled with Hindraf and with Jeffrey as well. All these have also brought disrepute to the party and damaged its image in the public eye. Soon, he will quarrel with the Sarawakians and get chased out from there as well.

Caught with pants down

Anwar has also been caught with his pants down after Batu Sapi division chief Nahalan Damsal revealed to the media that Anwar phoned him once and tried, during their one-hour telephone conversation, to persuade him not to support Jeffrey as the Sabah PKR Chief.

Nahalan said he was very shocked when Anwar implied why Nahalan, being a Muslim, was supporting a Christian, Jeffrey, to lead Sabah PKR.

The media disclosure in Sabah of the Nahalan-Anwar telephone conversation caused enormous disrepute to PKR and its public image. Either Nahalan or Anwar should have been put on the carpet, but nothing happened.

Many people believe that Nahalan, a former senior state minister, was telling the truth. Blogger Harris Ibrahim of The People's Parliament did some investigation on his own in Kota Kinabalu and verified the Nahalan version.
Posted by sabahkini.net at 20:20