Lee Fook Kong from Kampung Tanjung, Tuaran told Liew that he is a fisherman and his income only can support his family and there is no extra money for construction of housing.

Therefore he has applied to Syarikat Perumahan Negara Berhad (SPNB) for the ‘Rumah Mesra Rakyat Programme’ and the application approved.

However, the house was under construction last May, but has stop in July, 2009 (picture above) until today there is no sign of continuation. Lee repeatedly asked SPNB when the house can be finish, but received no response. He approached Sabah DAP for help to solve his problem. 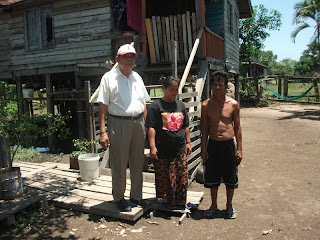 Dipok Koi from Kampung Tambalang told Peter Liew said that three years ago he also had applied for the housing program and the authorities have sent to inspect, take picture and made reports.

They told him that his application should be no problem. But after three years, there still no reply from SPNB. Dipok asked them if his application approved, but receive no reply. Dipok monthly income only RM300.00 by collecting paper box to feed his family and he is in need of the government assist for a house.

The Federal Government through Syarikat Perumahan Negara Berhad launched the ‘Rumah Mesra Rakyat Programme’ to assist low income group who owns a piece of land, such as fishermen, farmers and poverty stricken families who are facing difficulties in obtaining house loan from financial institutions. Their goal is to achieve every Malaysian family to have excellent quality and affordable housing, especially low-income groups, and to help the community to enhance standards of living and for people's welfare.

Liew said from Lee and Dipok’s case, it seems that it does not achieve their so-called goals and objectives. Peter Liew asks why the delay of Lee house and why Dipok’s application still no respond after 3 years.

Prime Minister and the BN government continued to announce plans to eradicate Zero Poverty, seems only talk than action. The people has had enough of empty promises, and we can see that the only way to help the poor out of poverty is to change the government.