SATIRE: WHO CUT THE CHERRY TREE ? 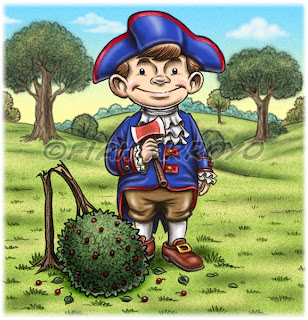 LEGEND has it that George Washington, America's first president, chopped down a cherry tree in his youth. The story goes that George gives the tree a good swing and chops it down with an axe.

His father sees the damaged tree and asks his son if he knows who did the deed. George is quoted bravely admitting the truth:

Below is a satire of how some Malaysian politicians may have reacted to this question:

Abdullah Ahmad Badawi : I did not cut down the tree, I was just taking a nap underneath it.

Najib Razak : I swear that I have never MET that tree.

Hishamuddin Hussein Onn : ...but I only own a keris, not an axe, how to cut down the cherry tree?

Dr Mahathir Mohamad : Apa nama cherry tree, yes, I chopped it down because, I don't like the idea of Pak lah sleeping under it.'

VK Lingam : It could be me, it might have been me but I don't think its me.

Anwar Ibrahim : I did NOT do it, and I am not giving any DNA sample for you to plant on the axe handle.

Mohd Khir Toyo : The new state government should just trim the grass and not waste time asking who cut the tree.'

Ahmad Said (Terengganu MB) : I chopped it because cherry trees are more expensive to maintain than durian trees.

Azalina Othman : The cherry tree is not included under my tourism MOU so I cut it down and besides there were unauthorised signboards put up around the tree.

Shabery Cheek : I challenge you to a debate on cherry tree cutting.

S Samy Velu : I chopped it because Hindraf members were using it as a meeting point.

Wira Ali Rustam : We have planted durian trees for 50 years and we will plant them for another 50 years, we do not need cheery trees, apple trees, pear trees and all those other foreign trees.

Rais Yatim : You must see the bigger picture, Ahmad said cherry trees are expensive to maintain, Ali Rustam said those are against our national identity and I needed to test my new axe, so you see, it is a WIN-WIN situation all around.

Sharir Samad : I cut the tree because we could no longer afford to subsidise it.

Karpal Singh : I know who cut the tree but I will not tell you now, you will hear it in court.

Bung Mokhtar : The big monkey did it.

Pandikar Amin Mulia : There is nothing in the standing orders against chopping cherry trees. Kinabatangan duduk, Bukit Gelugor duduk.

Khairy Jamaluddin : I did not do it, neither did the Mat Rempits. By the way, what's a cherry tree?

Lim Kit Siang : Cherry tree also you don't know, you are an insult to Oxford!

Nazri Abdul Aziz : Racist, racist, racist! When we cut down durian trees nobody made a fuss. Now...