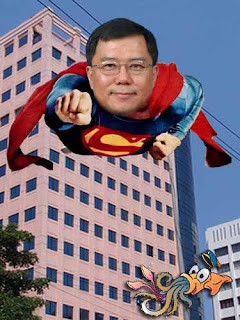 DATUK Yee Moh Chai is a hero in the making. He is a Lawyer, doctor, politician, British Permanent Resident, Cabinet Minister in the Sabah Government, Assemblyman, Ex-MP. He is most well remembered for his heartfelt campaign against the illegal immigrants. The people were so hopeful. He has been so successful that today he no longer talks about illegal immigrants anymore. The people are so thankful to him.

He personally caught phantom voters in the1999 elections. Now that he is a Minister in the BN-UMNO government, all phantom voters have disappeared. When he Won the 2008 election in Api-Api, there was no phantom vote. But 207 postal votes came in at mid-night. He finally won with a majority of 174. The number postal voters was so accurate. That is another achievement of Datuk Yee.

His Ministry is located in the Wisma Bandaraya. When he moved in 2008 after Datuk Tham Nyip Shen was kicked out, he wanted to clean up the place so, he ordered a RM5 million cleaning exercise, complete with new carpets, new furniture, new curtains and everything new.

That put a nice value to the building. The building owner was pleased. With the new place, Datuk Yee does not need a vacuum cleaner. He has already cleaned up the place.

One more achievement. Datuk Yee boasted that his ministry has trained tens of thousands of computer technicians. They are so successful that all of them have got good jobs in Sabah. None of the computer trainees has to go to KL to work.

So, We now provide extra pay, additional allowances and staff quarters for the 76 technicians from KL. This is a testimony of DatukYee’s extreme success. Sabah cannot do without him.

We are the supporters of Datuk Dr. Yee Moh Chai. Call us little squids or ‘Sotong Chai’.

Last week, local businessman Dato’ David Chong Ket Sui said Datuk Dr. Yee Moh Chai has not done anything for the people in his 8 years as a minister. Datuk Dr. Yee was also an MP for 14 years, from 1995 to 2008 and an assemblyman for 12 years ever since1999.

He is one of the longest service MP or assemblyman in Sabah. Actually, Datuk Yee is only in the7th year as a State Minister, not 8 years as stated by David Chong.

It is not 100% true that Datuk Dr. Yee has not done anything for the people. The people in Luyang can witness the monument left by Datuk Dr. Yee for future generations to enjoy.

We are talking about the steel chairs on the road side at Luyang, behind Bornion Centre. If you don’t believe, you can see for yourselves. The name ‘Datuk Dr. Yee Moh Chai, Member of Parliament’ is engraved in steel on the iron chairs. That way, he is sure he will be remembered for ever by future generations.

Once a week, his political secretary, press secretary, drivers and countless kapitans keep him company when he pops in to Luyang to see his iron chairs.

In the next chapter, we visit his toilets.