ON DEATH'S TRAIL, A DETECTIVE LARGER THAN LIFE 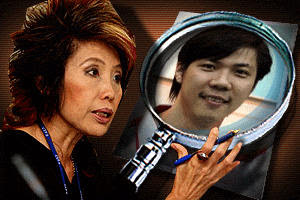 THE mild-mannered bank manager poked his head into the doorway, then quickly pulled it back. His wife was at work, and he did not want to look. He has never looked. He is afraid of corpses.
If the body on the stainless steel table inside had somehow awakened for a moment, it might have jumped, too, with shock.
Bending over it, with hungry fascination, was a woman whose head was covered with dark red spikes, whose lips were the color of dried blood, whose gloved fingernails, as she prepared to slice the body open, were encrusted with spangles.
Or perhaps the body would have said, as a dying accident victim once did, ''Oh, hello, Dr. Death.''
Once someone has seen Dr. Pornthip Rojanasunand, 47, the country's most famous pathologist, on television or on the cover of one of her best-selling books, it is impossible to forget her. She may be the strangest looking woman in Thailand.
Outlandish outfits. Platform shoes. Hair that seems to say, ''Surprise!'' in orange, rust, scarlet, mauve, chestnut. And, most unnerving, an absolutely straight face.
But Dr. Pornthip has earned her nickname not only through her flamboyance and this is not a nation of flamboyant people but also through her professional innovations and her straight talk about crime and social issues.

Almost single-handedly she has expanded the nearly nonexistent field of forensic pathology, has belatedly introduced DNA testing to Thailand and has brought some order to the procedures of her calling, detective work on the dead.
In a country where power and status are something like a business-class ticket that offers special perks and comforts, Dr. Pornthip's candor about high-profile crimes has made her a real nuisance to the police and to those they protect.
It may seem surprising to find a pathologist on the front lines of social change, but Dr. Pornthip, in calling a bullet wound a bullet wound, is a leading voice in the struggle to replace the rule of privilege with the rule of law.
''The chief of police hates me,'' she said, ''because the police use a double standard and for me, everyone is equal. An unidentified body is the same as a powerful man to me.''
When the police quickly announced two years ago that the death of a member of Parliament had been a suicide, Dr. Pornthip received death threats when she told the press that photographs of the body made that seem unlikely.
The police revised their report.

When the police claimed in a sensational case last year that they had immediately identified the dismembered remains of the victim through DNA analysis, she pointed out that such tests take much more time. Again the police backed down.
Until her public criticisms brought a change in procedure two years ago, the police alone conducted autopsies on victims of police shootings or people who died in custody.
''How can such a system be allowed to exist?'' she said. ''How can the public be certain that autopsies conducted by the police forensic institute in cases of extrajudicial killings are not modified to help the police?''
Dr. Pornthip is a self-made specialist as well as a self-made celebrity. Much of what she knows about her field she taught herself from books; at the time she began, there were only a half-dozen forensic pathologists in Thailand.
She found, in the tales told by the dead, a way to discomfit the privileged. ''I didn't like powerful people to take advantage of others,'' she said. ''I thought I could do something about that.''
The relatives of one murdered man asked for her help when the police said, unconvincingly, that he had been killed by gangsters. Her autopsy found a bullet that provided evidence implicating the police themselves in the killing.

It is dramas like these that make her four books compulsive reading.

Her tales of her medical detective work, interspersed with how-to hints on dissection and bone-cutting, are told in chapters with irresistible titles like ‘My First Corpse’, ‘Death by Tapeworm’ and ‘I'm Not Scared of Ghosts’, ‘I'm Just Scared of the Smell’.
On the cover of one book she is dressed in vestal white, cradling a skull. On the cover of her latest, titled ‘Teaching With Corpses’ and published this year, she appears with her husband and daughter, all three of them in bright red outfits.

Dr. Pornthip is not, although she looks it, a person of the night.

Rather, she is a person of the predawn, when it is always darkest. She arrives most days at Ramathibodi Hospital by 5 a.m., and as the living world still sleeps, she is alone with her cold corpses, slicing, sawing and cracking bones.

From these swollen and discolored bodies she extracts the jewels of her craft, the liver, the heart, the kidney, the last dinner. Sliced and studied under an electron microscope, they reveal their secrets.

Her own secrets, hidden under her gaudy exterior, are harder to dislodge. Her parents, both scientists and teachers, tried, in vain, to steer her toward conformity, insisting that she study medicine rather than architecture.

Pathology attracted her, she said, because of the freedom and detective work involved and the chance to confront official hypocrisy.

Her artistic side found other outlets: drawing, cooking, homemaking, collecting popular music and the creation of her public image: long black dresses, leopard-skin tops, rainbow tunics, just about anything that no one else, not even rebellious kids, is wearing.

But she becomes suddenly colorless when asked the meaning of her visual statement. ''It cheers me up,'' she says, as if she had never given it a thought. Or, ''I think it makes me look younger.''

Special occasions hardly affect her look; perhaps a handful of glitter in her hair. ''I don't like going to parties,'' she said unexpectedly. ''I don't like a lot of people looking at me.''
If this is irony, it is seamless.

Her husband, Wichai, the bank manager, is her straight man, dry and low-key. For the first years of their marriage, he claims, he had no idea his wife worked with cadavers. ''I just thought she looked into a microscope and analyzed things.'' When at last he visited her workplace, he said, ''I ran”.

Their 9-year-old daughter, Nong Ten, seems to have a better idea of what her mother does than Dr. Pornthip's husband did at first. At school she has started drawing pictures of imaginary autopsy rooms and machines for extracting bones from bodies.

It is honorable work, her mother explains.

''I tell her that I have a duty to work with dead bodies to find out the truth about their death,'' Dr. Pornthip said. ''And if we do good, good will come back to us.''

For all her experience with cadavers, Dr. Pornthip does not seem to have given a great deal of thought to the manner of her own death.

She has worked on a man who choked to death on a banana and a snake-handler who was strangled by one of his pets. She has dealt with epidemics of suicide by jumping, hanging or swallowing rat poison.

None of that seems to have inspired her fertile imagination. Like just about everybody else, she said she would prefer to die in her sleep.
Posted by sabahkini.net at 22:06