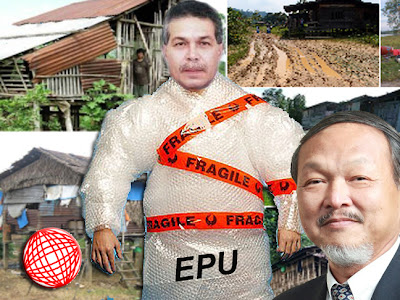 THE STATEMENT made by the Director of the Sabah State Economic Planning Unit (EPU), Datuk Ismail Abdullah, refuting 'allegations' made by DAP Luyang assemblyman Hiew King Cheu that RM10.9 billion of the federal development funds approved for Sabah under the 9th Malaysia Plan (2006-2010) was not spent is absolutely ridiculous from a person who is in-charge of the state economy planning unit.

Ismail should have checked and verify his information and facts thoroughly internally and with all other associate departments before committing his statement to the mass media. It looked very unprofessional and shameful for him to make statements in the absences of established facts and figures.

Ismail should also check with the Parliament because the information and figures were not plucked from the sky but these were from the Parliament reply in the 12th Parliament sitting by the Prime Minister.

It really looks like the EPU is sleeping on the job and has cheated the people of Sabah on the projects which had been planned for Sabah. It is because of people like Ismail and slackness in the unit that Sabah is now twenty years behind West Malaysia in terms of development. The planning unit still insists on putting “cotton wool” in the eyes of the Sabahans by refuting true statements made by the opposition in the interests of the people and for the progress and development in Sabah.

As from the Director of EPU Ismail that they had not made full use of the allocations under the 9th Malaysia Plan (2006-2010), so who should be held responsible?

Sabahan must be very vigilant in order to ensure that RM20.3 billion allocated for the 10th Malaysia Plans, 2011 to 2015 and now in its mid term, must be completely utilized and implemented including the arrears that were supposed to have been allocated in the pasts Malaysia Plans.

It is useless to have plans that the government is not firm on implementing, and it is true that “plans without implementations are as good as no plan at all!”

Furthermore, will the 10th Malaysia Plan face the same situation where the money allocated couldn’t be completely utilized to benefit the people, but to be push forward into the 11th Plan? The people are watching and waiting.

Ismail must start cracking and get to work (turun padang), if he doesn’t want the Sabahan to face serious economy set back and further jeopardy.

A very good example of slackness in the government departments is the Sabah Land and Survey Department where the Title Survey Plans were unable to be updated after so many years.

The list of government slackness is very long, unless the department heads buck up or else they will face the music from the people. The people want the opposition assemblymen to raise more questions in the state assembly on the misdoing of the government, so “pull up your sleeves and buck up”!

The government must ensure that projects planned are properly “executed and implemented”, and the job of the opposition is to “check and ensure” that Sabah is progressing well and to be developed as plan.

We are not in the “blame game”, but we are elected by the people to work for the people and to ensure that all the interests of the people are “well protected and safe guarded”. The BN government holds the power to spend the allocated funds for the people, and the people want them to get things done accordingly.

How dare they openly admit that they couldn’t spend all the funds that were allocated from the Federal fund to do good for the people? By right they should have ask for more if they were not given enough. This is definitely a serious wrong doing and a count of incompetence. If they were some company managers, they could have been sacked long time ago.

Hiew said he had done his work in the last Parliament, and the facts and figures he had quoted in his press statements were based on the written reply from the PM during the last Parliament session. It is not an “allegation” but if it is wrong then the Prime Minister or his Ministers and officers will have to explain to the people.

He advised Ismail to check and confirm, or he should apologize to the people. Besides, the new Sepaggar MP Jumat Idris had claimed that the KK City Mayor Datuk Abidin still have to utilize RM4 to 5 millions federal fund in the Sepanggar area.
Posted by sabahkini.net at 09:20