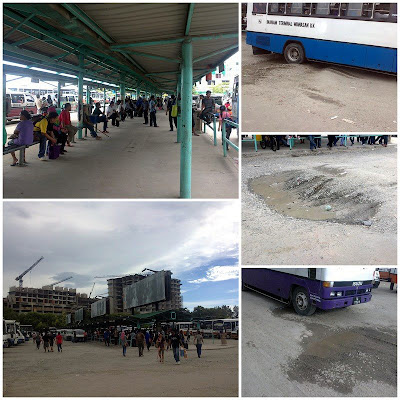 BIG POT holes and bad road condition at the terminal had cause a dilemma to the bus driver as it will cause damage to the tire and add additional cost to their business.

Commuters had to endure dust and dangerous walkway of loosen stones and mud to get to their respective bus. The waiting terminal has is not helping as there are less place to sit while waiting for the ride to come and dust raised when every time breeze or bus passed by.

The promised terminal station by DBKK will not be enough to chartered the amount of the commuters as many of the bus driver puzzled that is it only for the city shuttle and not others. The land they occupied now is belong to some private company and a building are planned on it.

While DBKK are busy in adding more parking space around the city, they failed to look into the public bus service. The quality of the bus service in this town is far worst than small town and this is a shame to the city as many tourist come and go using this transportation system.

The big question is, what are the authority going to do about it?
Posted by sabahkini.net at 11:12