SOLDIERS IN BLACK, FIGHTING FOR DEMOCRACY’ 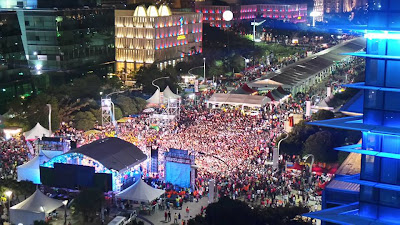 PETALING JAYA: The Blackout 505 rally at Dataran PJ here against the various misconducts in the recently concluded general election kicked off at 5.15pm with more than 3,000 people in attendance.

By 9pm, the organisers claimed that the rally had attracted about 50,000 people.

Almost everyone in the crowd was dressed in black and carried the flags of Pakatan Rakyat parties. The rally kicked off with the rendition of Negaraku, followed by speeches from NGO leaders.

Ekhsan Bukharee Badrul Hisham of Solidariti Mahasiswa Malaysia, emcee for the rally, said the rally was held mainly to urge the EC chief to step down.

“The main reason for us to gather here is to urge the chief of the corrupt EC to resign after all the fraud that took place during GE13,” he said.

“We as Malaysians also want a re-election at constituencies which electoral fraud could be proved,” he added.

The highlight of the rally would be speeches by Pakatan leaders, including Anwar Ibrahim, on how the election was ‘stolen’ from them. Pakatan has accused the Election Commission of colluding with Barisan Nasional to ensure a victory for BN.

Some of the rally participants were seen stomping of photographs of EC bosses, clearly showing their anger over the way the election was conducted.

The speakers meanwhile urged the EC officials to resign and for fresh elections to be held in constituencies where fraud was rampant.

Student activist KS Bawani who shot to fame with the infamous ‘Listen, listen, listen’ video clip that went viral on the social network, also expressed her dissatisfaction over GE13.

“We have warned the EC and the government to play it fair at the elections, but they robbed us off a fair election. Now face our wrath,” she said.

“All of you here, are here not only as Malaysians but as soldiers clad in black. Fighting to win for democracy,” she added.

Bawani also said that Malaysians are not daft and will not allow the cheating to go on. She stressed that the arrests under the Sedition Act will not stop the people from standing up for their rights.

“We have learnt to fight the hard way.

“They can arrest one thousand people but I assure you, another thousand will spawn,” she said.

Seri Setia state assemblyman Nik Nazmi Nik Ahmad meanwhile urged Malaysians to come forth and continue to make police reports if they had witnessed electoral fraud during the GE.

“It’s not enough that we gather and protest, all those who have encountered electoral fraud, including dissatisfaction on the indelible ink, should lodge police reports,” he said.

“Isn’t BN ashamed to take oath as the new government despite the fact that the popular votes showed a clear Pakatan win?” he asked.

Badrul also announced that another major rally would be held at Dataran Merdeka soon to express the people’s dismay over the ‘faulty’ election results.

The rally today follows a series of nationwide rallies organised by Pakatan to highlight to the people on the alleged electoral fraud.

The police have warned that the rally today was illegal as the organisers have not given the police the required 10-day notice as required by the Peaceful Assembly Act.

Home Minister Ahmad Zahid Hamidi has also warned the participants that action would be taken against them for participating in an illegal rally.

However the police were not seen in the vicinity although several trucks with Federal Reserve Unit personnel have been seen passing by. Traffic policemen meanwhile helped in keeping the traffic flow smooth.

A larger crowd is expected to gather here later, especially when the big guns start arriving to give their ceramah.

PKR is also holding its national congress in the nearby PJ Civic Centre and its leaders and members are expected to join in as soon as they finish with their business.

The rally today is organised by a group of more than 50 NGOs. The organisers have said that the rally was part of a Pakatan Selangor state government programme to meet up with voters.

“There is no question of obtaining permit and the people should not have any fear in attending,” said a spokesperson for Gabungan ‘Suara Rakyat 505′.
Posted by sabahkini.net at 11:41