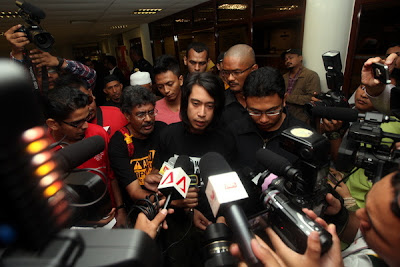 Regardless of where we stand on the political spectrum, we all expect the space to voice our opinions and express dissent within a democratic framework.

Personally, I do not agree with the authorities decision to arrest Adli and others, if anything, it only legitimises the accusations of Barisan Nasional’s opponents. At the same time, one must attempt to view this situation through the lenses of the government.

Whether we’d like to admit it or not, the authorities have been extremely soft on public gatherings, candlelight vigils, and opposition rallies held after the May 5 election. Rallies were met with no resistance; few if any security personnel were in attendance, and attendees were not infringed upon or prevented from exercising their freedom of expression.

As far as I am aware, the police did not exercise force upon any rally-goer, nor did authorities block access to print or digital media that is favourable to the opposition prior to the recent arrests of Adli and others.

By international standards, the response of the state has been extremely liberal. In countries such as Australia, the United States, and within the European Union, public displays of dissent are more often than not met with police batons and ‘less-lethal’ munitions such as rubber bullets. (Malaysia does not use the latter.)

In the regional context, the crowd dispersal protocols in neighbouring countries are significantly more heavy-handed than practices in Malaysia. When Thailand faced significant political unrest in 2010 over challenges to the rule of former PM Abhisit Vejjajiva, the government authorised the use of live ammunition and ordered curfews for several days; popular areas of Bangkok looked like war-zones, the domestic economy nearly ground to a halt, and handfuls of civilian causalities were incurred.

The recent arrests of opposition figures over charges of sedition should be seen in the context of opposition members crossing a ‘red line’ set by authorities.

After successive rallies and continued momentum from those members of the opposition, calls to march to Putrajaya and overthrow the Barisan Nasional ‘by force’ were seen by authorities as the moment when these figures began abusing the softness granted by the authorities.

Given the momentum the opposition is able to conjure, a strong case can be made that country’s social harmony could indeed be put into question if masses of black-shirted protesters descended on Putrajaya with the express purpose of overthrowing the legal government of the day.

The central message of this article is that despite whether we believe in what Adli and others preach, any government would behave similarly.

Although I do not follow the Pakatan gospel, I believe that space should be allotted for dissent, but not abused when it is allotted rather generously in contrast to other countries, or used to spread unverified claims and unsubstantiated allegations.

While these arrests may do well to conjure nostalgia of days past when Malaysian leaders used the ISA to roundup and stifle dissidents, the current scenario is far less authoritarian by contrast.

Adli was released on bail in less than a week, while Tian Chua, Tamrin Ghafar and Haris Ibrahim were released in less than 48 hours. These arrests, intended to squash the momentum to rally on Putrajaya, probably did the opposite – they turned Adam Adli into a household name for many.

If members of the opposition want to help dismantle draconian legislation, they should cease from endlessly provoking the state into acting with a heavy-hand.

The general election results prove that the two-coalition system is firmly entrenched, and the hostility between political actors that by necessity must work together is deeply troubling.

Members of Pakatan who endorsed the usurpation of Putrajaya only advertise their contentious motives and political immaturity.

For those who choose not parrot the Pakatan mantras, it is because the opposition relies on inflated claims of the Barisan Nasional engineering ‘massive fraud’, and it has not produced definitive evidence that has convinced the greater population.

The hostility between the two coalitions is not conducive to stability, or the more just democratic order that both parties aspire to. This tense climate has divided the country, and created a situation where supporters of either side dismiss the claims of the other instinctively.

Such a climate stifles the ability of individuals to objectively form their own conclusions.

It is important that PM Najib Tun Razak repeals and replaces the Sedition Act with the National Harmony Act as he promised to do. In doing that, the opposition must close the book on its ‘massive fraud’ road show and begin co-operating with the federal government on issues of concern.

For now, members of the opposition are more focused on coaxing the government into abandoning its ‘soft’ approach rather than focusing on issues of governance.

(NOTE : Nile Bowie is a Malaysia-based political analyst and a columnist with Russia Today. He also contributes to PressTV, Global Research, and CounterPunch. He can be reached at nilebowie@gmail.com.)
Posted by sabahkini.net at 01:24