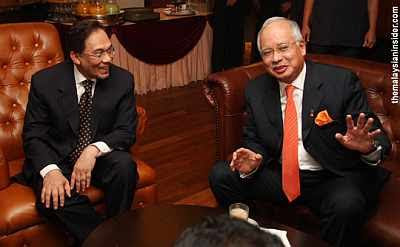 ASSUMING that the differences between the Form 14 vote count and the post-Form 14 vote recount allegedly with the addition of unexplained postal votes or other boxes do not alter the 13th General Election result in terms of seat distribution; the fact still remains that the Opposition won the popular vote by 53 per cent, Pakatan Rakyat (PR) won the popular vote by 51 per cent while Barisan Nasional (BN) obtained only 47 per cent of the popular vote despite winning 133 seats in Parliament under the now infamous First Past the Post System.

We haven't even got into the nitty gritty details of the race for the Perak and Terengganu state assemblies yet. Here, BN won by a three seat and two seat margin respectively.

BN claims it won the GE. Patently, it has no moral right to govern, only the legal right.

PR claims it won the GE since the majority of the people voted for it. It rightly claims the moral, if not the legal, right to govern.

But how is it going to rule with just 89 seats in the 222 seat Parliament? The Government will fall on a no confidence motion on the very first day that Parliament convenes.

Again, we assume here that the King will call upon a member of Parliament -- the PR leader in the August House -- who does not command the confidence of the majority, to be sworn in as Prime Minister in defiance of the Federal Constitution.

It's not good enough PR claiming and complaining to the King that BN stole 27 parliamentary seats from it, 19 from Parti Keadilan Rakyat (PKR) alone and the rest from Dap and Pas. Both Dap and Pas have accepted the GE13 results. They are willing to sacrifice the eight seats collectively "stolen" from them, put it down to experience, and move on.

The right forum to complain about the 27 "stolen" seats is the Election Court. Rhetoric and polemics, entertaining as they are, will get us nowhere in the end.

Nevertheless, we are in unchartered territory, if only because the public perception is that PR won GE13.

The onus is on Prime Minister Najib Abdul Razak.

He can in fact considerably strengthen his own shaky position by sharing the Federal Cabinet and Government positions with the Opposition.

It will strengthen his Faction's position in Umno in preparation for:

(1) BN emerging as a registered political party: and

Both BN and PR must concede defeat and congratulate the other side on what they have achieved on 505.

In Parliament, the BN and the Opposition should continue to sit across from each other.

The Federal Cabinet can sit together to one side, keeping in mind the Doctrine of Separation of Powers.

All election petitions must be withdrawn and the Blackout 505 rallies brought to an end. Let's face it! There were no blackouts like during the Sibu by-election when BN tried to cheat its way to victory by adding unexplained postal votes.

Umno must call off its legions of moneybags who are even now making frantic attempts to woo PR legislators to the BN with desperate promises of cash, positions, projects and even more cash. Knowing the BN, and given past experience, most of these promises will not be kept.

The power-sharing formula at the Federal level should be duplicated in Perak and Terengganu.

In all other states, the status quo should remain.
Posted by sabahkini.net at 08:51