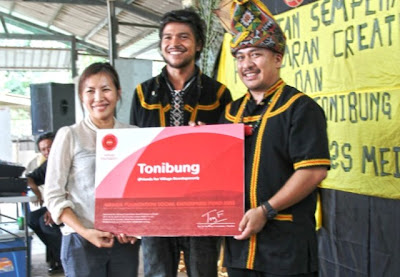 AT A TIME when people everywhere look for alternative energy sources, some indigenous communities in Sabah are turning to micro hydro-power to supply them with electricity.

CREATE was officially launched last Saturday and will be based at the Innovative Skills Training Centre at Kampung Nampasan, Penampang.

Founded by the indigenous community-based organization Tobpinai Ninkokoton Koburuon Kampung (TONIBUNG) in Penampang and Green Empowerment in the United States, CREATE's prototype creation is a micro hydro-power system that is able to generate 24-hour electricity supply from running water. This small-scale power generation plant does not disturb the environment as do large hydro power projects.

This is crucial as, according to Green Empowerment Programme Coordinator Gabriel Wynn, many Malaysians in rural areas still lack access to electricity, which is vital for powering economic activities, education and public health.

TONIBUNG Director, Adrian Lasimbang said that he looked forward to seeing youths from indigenous communities taking up skills training through CREATE so that they can in turn set up and manage micro-hydro power schemes at their respective villages.

“By mobilizing the community to take development into their own hands, we are able to introduce self-sustaining systems at a fraction of the conventional cost. This is the way forward in generating cost-effective, clean and reliable power for communities, especially in very remote areas,” Lasimbang said.

The Air Asia Foundation also handed over a RM58,000 social enterprise fund to CREATE at the launching of CREATE.

TONIBUNG was formed in 1993 by a group of youths from Kampung Nampasan who had obtained education and vocational training but were unable to secure employment due to the economic downturn in the late 1990s. TONIBUNG's first goal was to help jobless youths find jobs or set up small businesses.