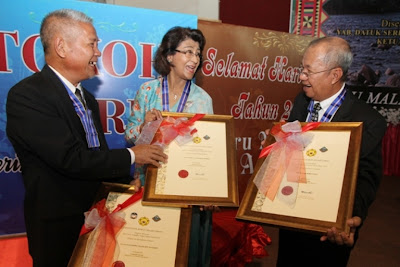 TEACHERS are educators that play a crucial role in moulding students. Their efforts make a huge impact in the students’ lives, including their character formation and social well-being.

The theme for Sabah’s 42nd Teachers Day celebration held today at Dewan Sri Sulaman, Tuaran is “Guru Malaysia, 1Aspirasi 1 Agenda”. Three teachers were awarded the Tokoh Guru Awards; Yakub Uton, Datin Lorna Catherine Perera and Mohd Shafie Matzain. They were given recognition for their distinguished performance and contribution towards the development of education in the State.

Yakub Uton, 60, from Tawau has certain beliefs about educating the young. He thinks that students need to dream big for them to achieve big in life.

“I often said to my students that they should be like Mat Jenin (one who dreams) and work hard to achieve their dreams because you need both ambition and hardwork to succeed,” he said.

Yakub started his teaching career in 1971 at SK Mentadak Baru Tawau and retired as a supervisor at the Evaluation and Examination Sector in Sabah Education Department. In his 37 years of career as an educator he was recognised by his peers for his ideas and efforts to improve the quality of teaching and the students’ performance at school.

"In our earlier years as teachers soon after independence we really had to struggle hard to put together facilities at school. It was tough.

“Those days, a school could have six classes with six teachers including the Headmaster. Today, we have twenty teachers teaching in six classes. That is progress,” he said.

He overcame many challenges and difficulties teaching in the rural schools and really appreciates the many positive changes over the years.

“There has been so much development, and there have been so many new facilities provided by the government over the years, but there is still much that can be further improved,” he said.

Referring to the award given to him, he said he appreciated the token of appreciation.

For Datin Lorna Catherine Perera, teaching is a passion. “We are responsible for the students’ future, so we need to do our best for them. Teachers play an important role, So being committed and passionate about education is crucial,” she said.

The 60-year-old teacher with a distinguished track record as Principle of SM Convent St. Francis Kota Kinabalu, SM St. Michael Penampang and SM ALL Saints Likas also believes that building a close rapport with the students is also consistent with sound teaching.

“Students must always come first. Teachers need to do a lot of reflections to become better teachers. The students are our priority and we must touch their hearts,” she said.

In her 33 years’ teaching career, she has received many awards such as the Sabah Sekolah Harapan Negara Award for SM St. Francis Convent in 1992. She was also instrumental in her school’s winning the Wetland Asia Inter School Education Programme on Wetlands Conservation Award in 2007.

The third recipient of the Toko Guru Award is Mohd Shafie Matzain from Beaufort. He is a teacher with a vision to transform rural schools, which led him to be invoved in the Dream School Project and the creation of the Rural School Awards in an effort to raise the level of rural education.

Mohd Shafie hopes that education in Malaysia, especially in Sabah, would develop and progress further to help students particularly in the rural area to realise their full potential.

Each recipient of the Tokoh Guru Sabah award received RM3,000, a gold medal and a commendation certificate. (Insight Sabah)