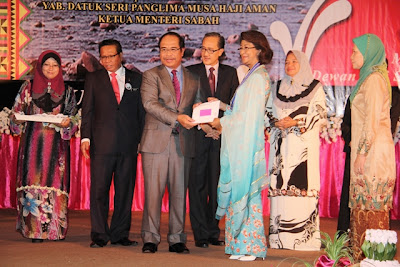 CHIEF Minister Datuk Seri Panglima Musa Aman urged educators in Sabah to strive towards a world-class education system that is in line with the Malaysian Education Development Plan 2013 – 2025 (PPPM).

“The Government and the people has high hopes on you as teachers to educate our children as well as to help develop our education system,” Musa said in his speech read by Deputy Chief Minister Datuk Seri Panglima Yahya Hussin at the launching of the State level Teacher’s Day Celebration in Tuaran today.

According to the Chief Minister, one of the goals under the PPPM is to ensure that students are capable of speaking more than one language. As such, students are encouraged to learn at least three different languages including Bahasa Malaysia, English and other languages such as Mandarin, Kadazan Dusun and Bajau.

Musa stressed that the government will relentlessly support the efforts of the State Education Department to mould students to be highly successful individuals in Sabah.

He thanked the teachers for their efforts to educate the young and to turn them into successful and knowledgeable citizens of the future.

In his speech, State Education Director Jame Alip noted that the success of PPPM depends  on the full cooperation of educators. This being so, teachers in the State have a large and challenging responsibility ahead of them.

“Always be a teacher of quality and a teacher who is effective in the classroom,” he advised the gathering.

Approximately 600 teachers from all over Sabah attended the State-level Teacher’s Day Celebration. (Insight Sabah)
Posted by sabahkini.net at 08:45