BN Vs PAKATAN IN CYBER WAR 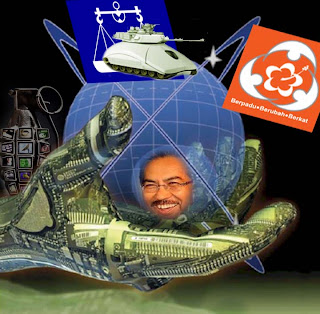 THE PAKATAN Rakyat and Barisan Nasional, in an effort to target the youth and first time voters in the state, are leaving no stones unturned to outsmart each other in the usage of Information Technology tools.

Though, the Pakatan Rakyat clearly seems to have the edge right now, Barisan claims that it is fast catching up.

Malaysia has changed a lot since 2008 General Elections, and a lot of myths regarding ‘high-tech campaigns not translating into votes’ will be shattered this time around. This seems to be the mood in Pakatan Rakyat’s IT Cell in Kuala Lumpur, which is drawing its inspiration from Barack Obama’s heavily Internet-loaded Presidential campaign in November 2008.

The State IT Cell of Pakatan has a core team of 10 in Sabah, with 20 cyber teams spread across the state, to aid the core team. In addition, the party has notched up a database of one hundred thousand email ids for bulk-emailing; and about 125,000 mobile phone numbers for bulk messaging, caller tunes, ring tones and various other mobile services solutions.

IT Cell In-charge Phua added, Our presence is also significant in various social networking sites. For example, there are about 213 Facebook and hundreds of twitter users and communities on Anwar Ibrahim and Lim Kit Siang and even Tok Guru Nik Aziz and Sabah state leaders from Pakatan.

Pakatan Rakyat is also planning a public rally around the state, “which will be attended by Facebook users and communities, not necessarily party workers,” added Phua.

When Umno president Datuk Seri Najib Razak called on his party to close ranks and prepare to go for war ahead of next week’s Umno general assembly, widely expected to be the last before the next general election; it didnt surprise me because I know Najib is going on a all out cyber attack on the opposition.

And UMNO leader even announced that Barisan would be setting up hundreds of Internet Kiosks across the country, to promote an online campaign for enrolling youth into the party as well as inform them about the Barisan’s achievement, it surprised many. But the ‘Najib’ factor has definitely lifted the spirits in Malaysia, at least in the IT initiatives.

In addition, UMNO has also tied up with a number of.com to publish poll related articles as well as carry out live opinion polls. And UMNO source informed,” We have tied-up with various Internet service providers to pitch UMNO and Barisan links as sponsored links in 100′s of websites that witness the maximum traffic over a period of time.”

The party is also targeting a large fraction of tele-density in the state for mobile service solutions like caller tunes, ring tones, screensavers etc. Other initiatives like bulk emailing and bulk-messaging are also in the pipeline.

Regarding social networking in the cyber world, UMNO also has many Facebook users on Najib Tun Razak. These are maintained by the younger lot.

And as far as Sabah is concern, Musa Aman’s government which has promoted good governance and development centric with impeccable credentials will be a selling point in the cyber front.