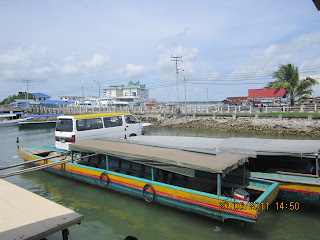 KK MP Hiew King Cheu asked the Federal Minister of Works in Parliament on the 23rd of October on when can the work be started on the long delayed Pulau Bum Bum Bridge.

The construction of the bridge linking from Pulau Bum Bum to Semporna that was announced long ago by the government with a cost of RM100 million again reaffirmed by the Ministry of Work that this bridge will be built under the RMK10 (10th Malaysia Plan).

In this October, some valuation report has been done to evaluate the maximization on ‘value for money’ and the best way to execute the project.

The scope of the project involved in the construction of a 1.45 kilometers of bridge, and 8 KM of road on the island with a double lane road with JKR standard R5. Also under the ‘rolling plan’ of the RMK10, there will be plan to commence to improve the present jetty at Pulau Bum Bum.

The construction of the bridge to be put on the ‘rolling plan’ will have to be proposed to the Economic Planning Unit of the Prime Minister Department for approval.

MP Hiew viewed from the content of the answer that the Ministry has no intention to carry out the work to build the bridge. Since the bridge building had been announced long before, but why now is still looking for ways to get it started or even approved.

Where was the sum budgeted during the last budget? Why now has to put on the rolling plan under RMK10, and have to propose to EPU in the PM department?

The Ministry of Works further said that they will improve the ferry jetty first in Pulau Bum Bum, in fact this should have been done long time ago. The question is why there are no ferries services which should have been in operation to cross the short stretch of sea safely from Semporna to Pulau Bum Bum.

The people are still taking risk to cross the sea and ferrying there vehicles in some “super stunt” act until today. This supper stunt act was published by the news media before. Hiew said before the bridge is ready the government should come up with a ferry service to cater for the needs of the people here, and be for another 10 years or more?

This is typical EVIDENCE that the government has once again failed to take care the well being of the people in Sabah. We are in lack of good infrastructures in Sabah, and should we continue to suffer? This coming election is the chance to fight back and look for change, because we are not third class citizens!