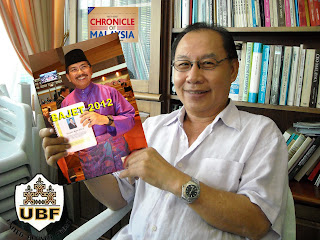 THE EXHORTATION of the 2012 State Budget rings hollow and the accolades by BN leaders and supporters are presumptuous and sometimes border on the ‘angkat ampu’ type.

Datuk Dr Jeffrey Kitingan, the founder of the United Borneo Front (UBF) explained that while the 2012 State Budget of a record RM4.048 billion may be the biggest in the history of the State, it needs to be seen in the perspective of a loss of some RM32 billion of revenue ‘lost’ to the Federal Government which could translate into a State Budget of RM36 billion and even assuming a 50:50 revenue sharing formula with the Federal Government, the State Budget would still be at least RM20 billion instead of RM4.0 billion as presented by the Chief Minister last Friday.

Dr Jeffrey highlighted that under Point 11 of the 20 Points Memorandum, "Sabah should have control of its own finance, development funds and tariffs" at a Borneo Tea Party gathering at Bongawan town on Sunday, November 21st, attended by an enthusiastic crowd comprising of UBF supporters, SAPP members and other BN component party members of various races.

Dr Jeffrey added that, "Each year the Federal Government collects about RM16 to RM18 billion from Sabah in the form of Federal taxes and other revenues. Based on the 2012 Budget, Sabah will receive about RM775.46 million representing the 5% oil royalties which means PETRONAS will receive RM14.734 billion."

If Point 11 was adopted in full, it would mean that the 2012 Sabah Budget would have been about RM36 billion including the RM3.69 billion estimated revenue for 2012. "Even assuming an equal 50% sharing with the Federal Government, Sabah will still receive about RM20 billion."

Dr. Jeffrey further stated that under Borneo Agenda No. 2, UBF seeks a fairer and more equitable revenue sharing formula with the Federal Government and that with at least RM20 billion a year, the State Government will have plenty of funds to assist the poor in Sabah there would be no more poverty in which, currently, Sabah is the poorest State with more than 40% of all poor Malaysians. The crowd roared in approval and support when questioned by Dr. Jeffrey whether they would support Borneo Agenda No. 2.

"Without the more RM30 billion revenue collected from Sabah, Malaysia would have gone bankrupt sooner than later; If Sabah had not agreed to join the Federation of Malaysia," added Dr. Jeffrey.

In conclusion, Dr. Jeffrey urged the crowd to seize the current ‘window of opportunity’ to stand united and utilize the unity to seek and restore the rights and interests of Sabah including a fairer and more equitable revenue sharing formula.