LANDSLIDES, NOT A FESTIVAL! 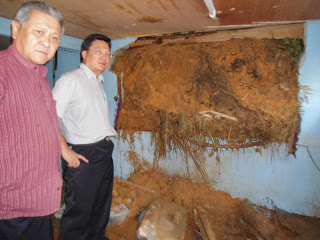 THE YEAR end monsoon season with extremely & extraordinary volume of rainfall should serve as a reminder to local authorities to vigilantly check on areas prone to landslides.

PKR Sabah Secretary, Dr Roland Chia revealed this while visiting the victim and his family whose house in Kg Nossob Baru, Kapayan was badly damaged last weekend after a heavy downpour. The incident was thought to have happened at 630pm on Saturday night. Thank God no lives were lost.

Fail to Plan is Plan to Fail. There should be preventive measures done instead of reactionary measures. This is to avoid any lost of lives and lost of home. Now the victim has to raise funds to rebuild his home whose meager salary could just make ends meet for himself and the family.

According to the victim, his wife and the children are still in trauma and shock over what has happened to their homes. Now the house is full of mud and much of the properties have been damaged.

Dr Roland Chia urged the authorities concern to start surveying potential areas that are prone to landslides and implement preventive measure immediately. This will definitely augur well with the RM4 Billion record budget proposed by the State Government recently in their 2012 State Budget.