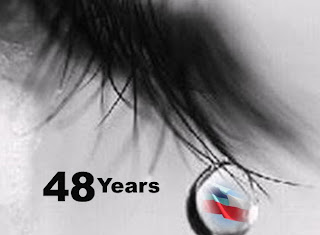 THE WIND of change is sweeping throughout Sabah and Sarawak. After nearly 50 years there is a movement that is calling for total national unity in the Borneo states.

The United Borneo Front (UBF), an ad hoc NGO led by Jeffrey Kitingan, a former PKR Vice President, is awakening the people to the plight of Sabah and Sarawak’s association with the Peninsula.

The UBF has been holding meetings all over the two states and droves of people turn up to hear the arguments of its leader.

UBF’s rally cry is ‘Unity is Duty’ and the Sabahans who are taken in by this are the children and grandchildren who voted for Malaysia in 1963.

They are now beginning to realise rather belatedly, by all accounts, that their fathers and grandfathers made a ‘terrible mistake’ in opting for Malaysia, a term first used by French navigator Jules Dumont d’Urville in 1826 for Malaya.

It’s an open secret that a third of those in Sabah who favoured Malaysia in 1963 were Muslims under the leadership of the United Sabah National Organisation (Usno), led by the charismatic Suluk Chieftain Datu Mustapha Datu Harun.

It is widely believed that Mustapha, a Year One school dropout, hailed originally from the Philippines.

Another third, the United Nations then determined, were mostly local Chinese against any idea of Malaysia. This third included an equal number of people who wanted a period of independence before re-visiting the idea of Malaysia.

A further third, mostly non-Muslim natives, wanted more and better particulars on Malaysia, and more safeguards for Sabah and Sarawak, especially the native communities, before deciding on Malaysia.

There are no prizes for guessing why local Muslims in Sabah have now come around to the idea, often expressed hitherto only by their non-Muslim brethren, that the state needs to return to the independent status it attained on Aug 31,1963 before Malaysia intervened two weeks later on Sept 16, 1963.

In 1963, the local Muslims had high hopes that they would be a favoured community under the anticipated benign leadership of the ruling Malay elite in Kuala Lumpur. Many were even willing to accept the lowly status of being proxies for Kuala Lumpur, stooges and even traitors in return for a life of material comforts.

They reckoned the wrong as evident from the ousting of Mustapha as chief minister in 1976, the entry of the Peninsular Malaysia-based Umno in 1991 and the deregistration of Usno in 1994.

They swallowed hook, line and sinker, Kuala Lumpur’s neo-colonialist divide-and-rule policies in Sabah and Sarawak and became its first victims.

There are also other developments which have since fed into the growing local Muslim sense of alienation as they continue to wither under Putrajaya’s policy of internal colonisation.

The net result is that rebels within the community are being criminalised by the powers-that-be, demonised, dehumanised, neutralised, isolated, marginalised and being virtually eliminated and/or exterminated from the political arena.

A case in point is the struggle of Usno diehards to re-register their old party.

Having been thwarted once too many times on registration by the Registrar of Societies (ROS), ex-Usno members have now set up the ad hoc Kelab Usno under Datu Badaruddin Datu Mustapha, the son of the party’s founder. It’s the Kelab Usno members who ensure that local Muslims turn up in droves at UBF gatherings.

One sore point among local Muslims is the growing influx of illegal immigrants of their faith who secure Malaysian personal documents via the backdoor from Putrajaya, become instant natives, get on the electoral rolls and snap up the opportunities which would have otherwise gone to them.

This has included seats in the State Legislative Assembly and Parliament.

The crux of the Muslim problem in Sabah with the electoral rolls is the 12 tiny state seats and five tiny parliamentary seats created since 1994, mostly in the East Coast, on the basis of illegal immigrants on the electoral rolls.

Local Muslims find that the illegal immigrants have become the electoral fixed deposit of the ruling Barisan Nasional (BN), especially since the political tsunami of 2008, and at their expense.

Hence, their apparent growing desire to make common cause with other Sabahans–Dusuns (including Kadazans or urban Dusuns and Muruts), Chinese and others – who are spread over 28 state seats and 12 parliamentary seats.

The common cause strategy calls for total local rejection of Peninsular Malaysia-based political parties which are operating in Sabah in defiance of the political autonomy promised by the 1963 Malaysia Agreement.

The agreement, along with the Sabah 20 Points, governs the terms and conditions under which the state and Sarawak (18 Points) agreed to get together with Singapore, Malaya and Brunei to form the Federation of Malaysia. Brunei stayed out at the 11th hour and Singapore left, two years later, in 1965.

Local Muslims have plenty of other issues to complain about. For starters, next to the issue of illegal immigrants, there’s growing frustration over the huge revenues being taken out of the state by Putrajaya.

Last year alone the figure was RM17 billion from oil wells in the inner waters, and RM18 billion in other revenues. These figures are from the state and federal governments.

No one knows how much revenue the federal government derives from the gas wells in the inner and outer waters and the oil wells in the outer waters where most of the wells are located. All Petronas figures are deemed to be ‘state secrets’. Sabah gets a measly five percent royalty for production from the inner waters only.

In return for the revenue derived from Sabah, for the current 10th Five-Year Malaysia (2011-2015) Plan, Sabah and Sarawak equally share a measly RM9 billion allocation from the federal government while Peninsular Malaysia gets RM100 billion.

In Sabah, the push has come to shove, and it’s anybody guess how the forthcoming 13th general election will pan out.

The late coming on board of local Muslims is being cited as a key factor in the local opposition not getting its hopes up too high for change and reform.

No matter what happens at next general election, the reading for the 14th general election is that Peninsular Malaysia-based political parties will be totally rejected in Sabah.

This is expected to further facilitate the emergence of Sabah, along with Sarawak, as king-makers in Putrajaya, steering an even course as a third force between Barisan Nasional and the Peninsular Malaysia-based opposition alliance.