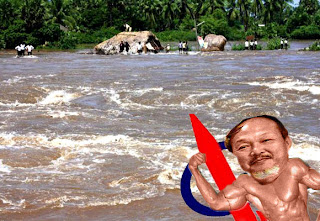 THE Sabah BN government had not only failed the people but also couldn’t stop the ever existing flood situation in the capital city Kota Kinabalu.

The ‘immediate plan’ as mentioned by the Assistant Minister to the Chief Minister Datuk Edward Khoo to deal with the long persisted flood problem is to set up a ‘Greater Kota Kinabalu Flood Prevention Committee’ and to have the first meeting soon. The Assistant Minister also said that ‘Flood knows no boundaries’, maybe he is referring to and worries about the difficulties in controlling the flood.

The last Saturday flood had caused much anger and dismay among the victims in Kota Kinabalu, and may be this flood had waken up the sleeping BN Chief Minister Datuk Musa Aman along with all his Ministers in the cabinet.

The public said this seems like at least 20 years too late to form the so call flood prevention committee. It would not be mentioned and formed until the BN government had been hammered on their disability to cater on the serious flood.

Now they are only finding excuses as well as taking their sweet time to discuss on how to solve the soaking wet problem of the people. They have not done anything since the previous many big floods in KK, why suddenly there is plan about setting up some committees? It is rather funny and surprising to do that, or may be because the next election is very near, and what will happen after the next election?

The flood in many flood-prompt areas is no new story, the problems is already existed there for a long time. Why repeatedly making announcement that the pump houses in Petagas and Sembulan are going to be built? The DID had the full complete plans and design for these flood gates and pump houses ready as far back in the early 90’s.

We have heard of these great plans, and promises after promises. Unfortunately where are all these flood control plans until today? For sure that DID will be able to produce the whole set of the ‘old and turned yellow’ construction drawings and documents of their design which had been shelved for a long time. Many people might have seen the old drawings too.

Very sorry to say that the Kota Kinabalu people will have to face flood water many times over again if the BN continues to govern Sabah. Many Billions ringgits can be used on other huge projects, but they couldn’t spare a little to cure the flooding sickness in KK.

The people will have to show their dismay and get even with BN by using their votes to get them replaced in the coming election. Pakatan Rakyat promises to solve it as their first task after taking over from BN, and you all can count on it.