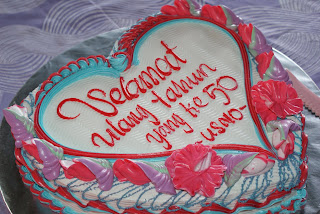 The Kg. Tanjung Kapor villagers had invited UBF and its Natives Land and NCR Panel Taskforce to visit their village and to air their grievances on their threatened demolition and eviction of their village homes, some of which have been in existence even before Sabah’s independence on 30th August 1963. 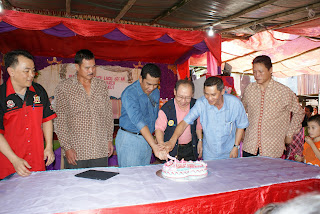 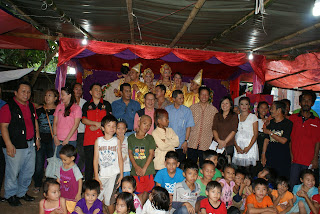 The USNO protem Vice-President and Secretary-General took the opportunity to attend the gathering, which started as a Family Day and Singing Contest for 1960s songs, at the last minute although they were scheduled in Tawau and Kuala Lumpur respectively.

Abdullah Sani had earlier told the large and wide-ranging crowd comprising of Bajau, Suluk, Sungai, Dusun, Rungus, Cagayan and other mixed races that Kg. Tanjung Kapor was the birthplace of USNO in 1961 and USNO founding father, Tun Datu Mustapha Datu Harun, was instrumental in the building of the Tembok Kudat and reclamation of land which also led t the expansion of Tanjong Kapur.

The event organizers led by Hendry Minar then arranged for a cake cutting ceremony by the UBF leader and the USNO protem leaders to mark the 50th year of the founding of USNO.

The festivities of the occasion were enhanced with the renditions of popular 1960s songs by the winning contestants, Mainie Bt. Abd. Kahar, Abd. Rahim Bin Madarun and Zalikah Bt. Jain, and veteran guest singer, Asnaf Said, and the performance of traditional Daling-daling dances by the Ubian natives and the nostalgic atmosphere led to the spontaneous shouts of ‘HIDUP USNO’.